I thought about doing something extra special for it, like the question thing I did for posts 900 and 1000, or some kind of retrospective linkfest to past posts that I really really like. Or maybe I could figure out some sort of other gimmick based on the number 15 that I could use, but I couldn't really come up with anything and 15 items of anything in a blog post would get boring after like number 4.

In all this racking of the brain, part of me just wanted to post a picture of a bunny with a pancake on its head and move on. Maybe I'll just get it over with, I told myself, so that I don't have to meet any expectations regarding such a milestone.

Above all else, what I didn't really want was to write some sort of "oh what a great journey it's been thanks for reading you guys" thing, because it would have been forced and artificial and I wouldn't have cared about writing it and you wouldn't have cared about reading it. I feel like I've written so many variations of that post already over the years and didn't want to do it again. But rest assured that I am thankful for you reading, even if this particular post hasn't amounted to a whole lot so far.

I have to admit that blogging isn't always fun nowadays. There have been stretches in recent years when this has felt more like a job than a hobby; as a soul-sucking drag rather than something that gets my creative juices flowing. It's really my own fault: I determine my own schedule, I'm the one who tells myself to keep doing it. I've cut back and that has helped. But I've thought this blog had reached its end several times.

The former RealLivePreacher Gordon Atkinson recently made the observation that not everybody has a blog anymore. We've passed the Big Blogging Moment and a lot of people have moved on to other social media forms for their online self-expression. I never really set out to blog because everyone else did. I just wanted to see what I would do with one. So I processed my earliest ministry years, then was a pseudo-Emerging Church blogger for a while, then turned into Super Serious Somebody Please Publish Me Blogger, and now I just kind of throw stuff on here and hope that somebody finds something worthwhile in it, including me.

Maybe I'll write another 1500 posts or another 15. I figure that if I stop caring so much about the specifics, this will be the fun thing I've always intended it to be. And at times that'll consist of a 1000-word self-reflective essay and at times it'll be a bunny with a pancake on its head. 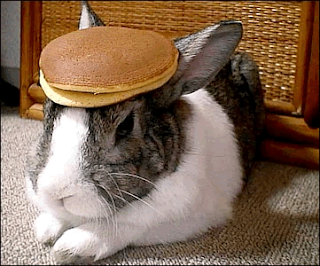