Well, actually... Brian shares a pic that has nothing to do with anything. But still, just, I mean look: 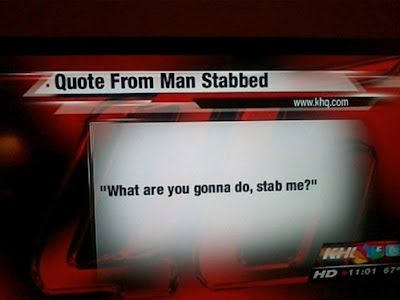 SATB. Nadia Bolz-Weber recently shared thoughts on how worship music is sung in her church, and congregational singing in general:


One of my non-negotiables going in to starting a church was that congregational singing be the primary musical expression of the gathered people of God. Not a band. Not an organ. Not a singer-songer writer strumming guitar chords. But the congregation itself.  Singing together means breathing together.  It means creating harmonies that cannot exist when we sing alone.  It builds community and sustains us in a way that nothing else can.

The liturgy booklets at HFASS include the actual music.  I know, very old fashioned of us.  I think churches musically infantilize people when we assume that because they “can’t read music” that they can only manage lyrics projected on a screen. I myself cannot read music.  But I can figure out that when the note goes up, I sing up and when it goes down I sing down and that notes with dots at the end are a little longer. That’s about all I or anyone else needs to know and when faced with an unfamiliar piece of music I have a great deal more chance to participate in singing it if I see the music than if you only give me the lyrics.

The full article includes a recording of the congregation singing "How Great Thou Art." They harmonize and everything. It's pretty cool.

Since my church began using projected words a little over a year ago, I've heard a few comments from parishioners that they still like seeing the notes because it helps them sing better, so they'll still take the large print bulletins that include the songs with music and follow along that way. I understand that. I have yet to see a projected hymn done well that includes the music. Maybe we could pioneer it, or maybe I just haven't looked hard enough.

One of the things I like about using a projector is that everyone's heads are looking up at the same image, voices raised, as opposed to individual noses buried in a songbook, singing back at the paper. There has been a noticeable sound difference in the past year. Surely there is a happy medium here somewhere.

Greg at The Parish pushes back against the "spiritual but not religious" connotation:


All the new Christian categories—Christ follower, Jesus follower, follower of the Way (hell, just pick one)—are all concepts that are used intentionally to avoid the unhappy conclusion that the follower is really a Christian, but a Christian who doesn't like the Christian tradition or church or some doctrine. Better to own the word Christian than have me interrogate you only to discover that you are actually a Christian. At that point, I think you're dishonest, disingenuous, ignorant, narcissistic, or confused. None of those are good.

Christians aren't the only guilty parties, though. Many of my spiritual but not religious acquaintances have no genuine framework for their faith. It's a completely self-serving construct that allows them to believe, in the words of Christian Smith I believe, "God loves me and wants me to be happy." What that requires is no commitment to a larger tradition, and a radical internalizing of metaphysical assumptions, all of which are exempt from criticism. Do you pray? Yes. Do you attend worship services? No. Do you have a sacred text? No. Will you go to heaven? Yes. What will it be like? It will be what I make it. How do you know there is a God? I just do. What's he or she like? He loves me. He's kind and forgiving and gracious. Why should he be those things and not angry, vengeful and capricious? He's not. How can you know this? What tradition taught you this? I have no tradition. I just know this. I'm not a religious person, just spiritual.

A few months ago, UCC pastor Lillian Daniel got a little heat for writing a similar piece. The points for both are basically the same: there is a certain contingent of those who call themselves "spiritual but not religious" who have no point of reference on which to base their beliefs. A lot of times, it seems to me, the SBNR group takes on a kind of naturalism: the divine can be experienced in and/or through everything: the sunset, a mountain ridge, etc. Greg's point is that there's no context for what kind of a God is experienced in those things. Does that God want you to do anything or live a certain way? In addition, those who talk about God in sunsets tend not to talk about God experienced in tornadoes. What kind of a nature-based God are we really dealing with?

For those who do have a tradition of reference, Greg's point is that if, for instance, you're basically talking about the Christian god when detailing your SBNR beliefs, why not just call yourself a Christian? My sense is that in these instances the person is rejecting the institution, the "keeper of the tradition," more than the tradition itself. So why not still call yourself [adherent of the religion of whatever institution you left]? This is likely a baggage issue: not wanting to deal with the bad stuff associated with the term, or something along those lines. But when denoting what you believe to others, prepare for the more astute to respond, "It sounds like you're this even though you don't call yourself this."

For my own part, I've greatly softened to the "cafeteria" charge that Greg lifts up, within reason. I've met too many people over the last 15 years with incredibly diverse religious backgrounds, who want to somehow honor all their spiritual stops in some way. I get it, and I respect it. The tricky part more worthy of critique comes, I think, when beliefs from several of these stops are diametrically opposed. It's probably in those instances where people see the "cafeteria" practice at work: something's got to give, and usually does, even within one tradition. But that last bit is for another time.

J-Ro! We did it! The Miami Heat won the NBA Championship last week. Of course, being in northeast Ohio, most people here are all LEBRON RABBLE RABBLE. But this was significant in a more positive way for Michigan fans, as Juwan Howard won a ring as well. He's the only Fab Five member still playing in the NBA, and the only one to have won a ring. Here he is celebrating in the locker room with fellow Fab Five alum Jalen Rose: