Yeah, but that's only what YOU think. This piece showed up recently at a blog called Everyday Theology:


We have individuals (products of the enlightenment) reading a text that was written in a communal framework (a product of a communal society). That provides a fundamental discrepancy that will never be resolved. It will always provide a disjointed experience and thought process that lacks continuity.

Let’s not pretend that we can think another way. We are heirs of the enlightenment – this is our operating system. We can download a new program like ‘christianity’ but it is operating within the individualist code. Talking with my friends who are from non-European descent (Native American, Pacific Islands or certain Asian communities)  it is clear that there is no simple conversion that an individual can undergo and simply start thinking in communal terms. We are cultural creatures and this is our culture.

It shows up when we read the Bible. It shows up when we talk of government (democracy) economy (consumerism), status, value, worth, choice, success, identity, rights, laws,leadership and … well nearly every other aspect of Western society.

The main point makes a lot of sense. Most, if not all, of what Christians refer to as scripture was written with building a sense of communal identity in mind. The Torah was established to make Israel distinct from the nations that surrounded it. The prophets were calling Israel and Judah back to faithfulness as a community. Jesus sought in part to form a new community based on the values of a kingdom alternative to Rome; the Gospels were written for specific communities who wanted to preserve and incarnate that narrative. The epistles were written to communities in need of advice, admonishment, assurance, and/or other words that start with A. Even Revelation was written to entire communities to assure them that God's endgame would eventually trump the oppression they were facing.

And we in a culture that is much more individualistic are trying to read these community-forming texts, primarily asking the question, "What does this mean for me personally?" The church reflects this culture in that sense, but in others as well: people change churches when they personally aren't "feeling fed" anymore, or they show up to a church asking not what they can contribute but what it can do for them. These are generalizations, of course, but it is a big part of what drives us as American Christians, whether we're aware of the tendency or not.

How can we regain a sense of community? How can we not only pay attention to the need to read the Bible as a communal text, but also to the implications that it has for modern faith communities? I don't necessarily have the answer, but it's quite a good reminder.

Yep. Been there. Jamie the Very Worst Missionary reflects on her experiences of others reacting to the word "missionary:"

We’ve watched our friends meet other missionaries and noticed that sometimes when they hear that word, something weird happens. We’ve seen couples who are simply living together suddenly become husband and wife, foul mouthed jocks suddenly wax eloquent, beer aficionados become teetotalers for the moment, and raunchy stories about what happened last Friday night get tabled for another time.

The rest of the piece is about viewing people as people or even friends rather than projects, the fear of becoming the latter being a possible reason why people react the way they do to those in vocations such as ours. I like to think that I don't view anyone--church member, church visitor, or random stranger--as a project when I meet them. But cultural assumptions are what they are, and so we do what we can.

And frankly, I'm glad that Jamie adds the part about not needing or wanting to be everybody's friend. I am, all told, fulfilling a role among a particular community of people, and it's been my experience that if one isn't vigilant, friendship can make things complicated in certain scenarios. I'm not of the strict "pastors can't be friends with church members" camp, but I do think that there come moments when people need a pastor rather than a friend, and switching back to the former after becoming the latter may be difficult.

Yep. Been there, too. Another cartoon from nakedpastor: 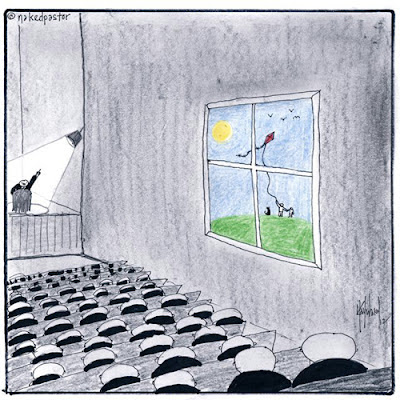 Misc. Shane Hipps is leaving Mars Hill Bible Church in Grand Rapids. The church is doing a public search for his replacement. Rachel Held Evans shares 12 signs you need a break from the internet. Nadia Bolz-Weber's Pentecost sermon from the Festival of Homiletics. Greg on the pitfalls of using religion angles in this year's presidential election. Luke on the Gospel According to the Hunchback of Notre Dame.
By Jeff Nelson
Email ThisBlogThis!Share to TwitterShare to FacebookShare to Pinterest
Labels: Bible, Church, Ministry, Small Sips
Newer Post Older Post Home