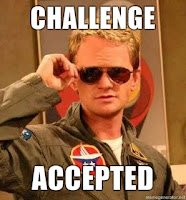 So, remember all that stuff I wrote about Tony Jones on Monday on my latest Small Sips entry? Some may argue that I was a bit excessive focusing on not one, but two of his recent posts criticizing liberal Christianity/mainline denominations. But I thought they were both worth commenting on, and I was in the sort of mood where that stuff was causing strong reactions.

Well, yesterday Jones added a new wrinkle to his ongoing commentary regarding these subjects as he laid down a challenge for liberal/progressive theo-bloggers:


These have prompted me to think that progressives have a God-talk problem. That is, progressives write lots of books and blog posts about social issues, the church, culture, and society. But we don’t write that much about God. That is, we don’t say substantive things about who God is, what God does, etc.

You might say the same thing about conservative Protestants (i.e., “evangelicals”). But the thing is, their people pretty much know what they think of God. It’s well-known and on the record.

Progressive/liberal/mainline theology, on the other hand, has a PR problem. We might think that people know what we think about God, but they don’t. It’s clear in the comments on this blog and elsewhere.

It really struck me yesterday, when listening to a recent edition of the TNT podcast, in which Tripp repeatedly and forcefully said things about who God is and how God acts. He didn’t relativize those statements with qualifiers, and he didn’t cowtow to political correctness or academic jargon. That was jarring to me because it so rarely happens.

Thus, I have a challenge:

I challenge all progressive theo-bloggers to write one post about God between now and August 15.

I get what he's doing, and I like it. So I'm going to participate. The thing is, though, that I want to take a little bit of time to think over what specifically about God I want to write about...that, and the next few days are crazy busy.

But my goal is to have something for you, dear reader, on Monday. So look for it then and no sooner.
By Jeff Nelson
Email ThisBlogThis!Share to TwitterShare to FacebookShare to Pinterest
Labels: Blogging, Theology
Newer Post Older Post Home