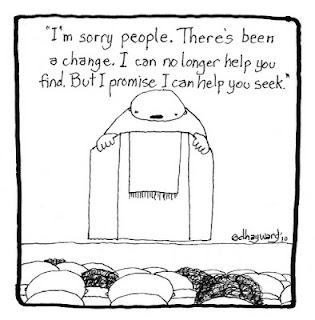 The cartoon on the right is by nakedpastor, who shared it a few weeks ago. There was something about it that resonated with me as a pastor, particularly in this time as my understanding of the role seems to be shifting a little.

For several years now, I've been wanting to be the pastor who Makes Stuff Happen. Whether on a programmatic level or on a pastoral care level, I can look back and see just how results-oriented I've been at points.

What this cartoon really stimulated for me was reflection on the pastoral care level. I can point to instances where I've wanted some visual change to take place in the person for whom I'm providing care. I've hoped for some "Aha!" moment to happen for them, perhaps even as I sit talking to them.

I should have known better from the beginning.

But now I do know better. Or at least I've been reminded again. So that must count for something, right?

I think that I have some things to repent for. At times I've tried to force people to find when I should have just helped them seek. This cartoon was a good reminder for me.

I look forward to beginning my spiritual direction program this weekend. Surely it will help remind me of that as well.
By Jeff Nelson
Email ThisBlogThis!Share to TwitterShare to FacebookShare to Pinterest
Labels: Church, Ministry, Spiritual Direction, Spirituality
Newer Post Older Post Home