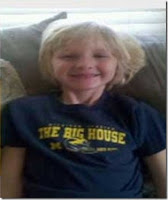 We don't need no thought control. Apparently I can add this to my list of worries about what my kids will experience growing up, resulting in emotional trauma. Well, it sort of already was, just not in this specific form:

A 5-year-old boy learned the hard way that Columbus, Ohio, isn't the only place that hates Michigan -- apparently Oklahoma does too.

Young Cooper Barton wore his favorite Michigan shirt to Wilson Elementary in Oklahoma City and was told it violated the Oklahoma City Public Schools dress code and was asked to turn the shirt inside out. According to the dress code, students are only allowed to wear Oklahoma, Oklahoma State or apparel from another Oklahoma state school. Everything else is a violation (especially Texas).

Remind me never to live in Oklahoma, for this and many other reasons.

I remember last fall right before The Game, Coffeeson's school encouraged kids to wear shirts supporting their favorite team on one side or the other. Well, of course, he has a Michigan shirt, so I put it on him figuring two things: 1) He'd be outnumbered by fans of the other school, and 2) Surely there'd be at least one other kid wearing maize and blue. I of course was right about the first, and as to the second I was very wrong. And thus I spent most of the day worrying about what would be heaped upon him by his classmates.

What I didn't take into account was that he and his classmates were 3 and 4 years old, and thus didn't really care. It probably won't be until sometime in elementary school when kids consciously realize the meaning and obligation behind wearing clothing supporting one school or the other. So, you see, I have a few more years before I have to worry for real.

All this is to say, I guess, that school administrators shouldn't be piling on as well.

Oh but wait, here's the reasoning behind making little Cooper turn his shirt inside out:


According to the television station, the Oklahoma City Public Schools dress code was created in 2005 as part of a way to rid schools of gangs and gang apparel.

Sports teams count as gangs now? So you only support gangs that like Oklahoma teams? A bit overboard, no?

A happy ending! There is a good postscript for this story:


The Michigan football program will have a rather special guest on Sept. 15.

Michigan athletic director Dave Brandon told AnnArbor.com on Thursday that the program will host five-year-old Cooper Barton and his family when the Wolverines take on Massachusetts at home this season.

Barton, an elementary school student at Wilson Elementary School in Oklahoma City, was recently forced to turn his Michigan football T-shirt inside out due to a violation of the institution's dress code.

On Wednesday, Brandon announced that he planned to invite Barton and his family to a game this season, and also had plans on presenting him with an inside out Wolverines T-shirt.

In addition, Brandon says he'd like to publicly recognize Barton and his family during the UMass home game.

Video. College football starts this weekend, so I'm a little giddy. Here's the end of last season's Under the Lights game:

I've watched replays of that game...um, let's say a couple times over the past year (read: pretty much any time I knew they were showing it on TV, plus clips on Youtube), along with replays of the 2011 Game and the 2012 Sugar Bowl, much to the eyerollingness of Coffeewife. Hey, last season was awesome, especially given what 2008-10 was like.

I'm bracing for 2012 to be a bit of a step downward, what with facing Alabama right away, then Notre Dame, Nebraska, and the Akron State Urban Meyers on the road, plus losing a few keys from last year's team. And for the love of Pete, can we please beat Sparty this year? At any rate, for the next 3-4 months my Saturdays are spoken for.


I’ve recently discovered that my Christian faith tends to fall into a sad and predictable cycle, complete with five phases:

Phase 1: My commitment to Jesus is primarily an intellectual one. He is an idea I believe in, not a person I follow.

Phase 2: I read through the Gospels again and realize that Jesus doesn’t want me to simply like him; he wants me to follow him.

Phase 3: I buy the latest Shane Claiborne book, read it in two days, and resolve that following Jesus means selling all my things, sleeping with the homeless, and starting a monastic community. I begin looking into the cost of apartments in inner-city Nashville.

Phase 4: I remember that I have a job, a mortgage, and a spouse (who hasn’t read Shane Claiborne).

Phase 5: Heavy with guilt and overwhelmed by the insurmountable nature of my own convictions, I give up and revert right back to Phase 1.

Following Jesus, it seems, just isn’t realistic. This cycle has been repeating itself for about three years now, but I think I may have figured out how to stop it…or at least make the ride a little less bumpy.

Hey. That sounds familiar to me. Probably because I go through this kind of a cycle as well.

The rest of the post reflects on what ordinary Christians with ordinary lives and responsibilities can do to be more faithful disciples, including a lot of small changes and substitutions that can add up to something much bigger.

This sounds familiar, too. Brant reflects on what fatherhood actually is, and how others present it to new parents:


Your wife is expecting. "This is going to be pretty exciting," you say.

"You just wait, because you won't be getting any sleep anymore, once that baby's born. It's all over. It gets harder. It gets worse."

Read the whole thing. He has one of these for every stage of a child's life, and then the last few lines come and you have to pretend you're wiping away dust from your eyes if you're reading it in the middle of a busy coffeehouse. Uh, that may happen, for instance.

Misc. Jan on The Nuance-Savvy Pastor. Tony Jones compiled the results from his progressive blogger challenge on a Storify page...or at least some of them. Mine's not on there. What's up, Jones? Fake historian David Barton had one of his books pulled off the shelves because the publisher "lost confidence in the book's details." Score one for sanity.
By Jeff Nelson
Email ThisBlogThis!Share to TwitterShare to FacebookShare to Pinterest
Labels: Fatherhood, Small Sips, Sports
Newer Post Older Post Home