On Being the "Wrong" Kind of Christian 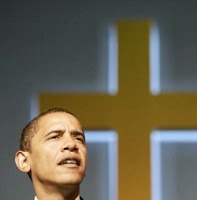 This past Sunday, CNN's John Blake posted a blog post with an incredibly stupid and misleading headline: Is Obama the "Wrong" Kind of Christian? While the individual page headline seems to have been changed ("The Gospel According to Obama"), the front page still carries this headline, which may raise doubts about the president's faith in the reader right off the bat before one even reads the article. But sensationalism gets hits, so whatever.

The article's title takes its cue from a quote from Jim Wallis included within:


“Barack Obama has referred to his faith more times than most presidents ever have, but for many it’s the wrong kind of faith,” says Jim Wallis, head of Sojourners, an evangelical activist group based in Washington that focuses on poverty and social justice issues.

“It is not the faith of the religious right. It’s about things that they don’t talk about. It’s about how the Bible is full of God’s clear instruction to care for the poor.”

The entire article is decently written, with viewpoints from conservative and liberal faith leaders regarding the various ways Christianity is practiced in the United States. One pastor in the article points to President Obama's lack of "born again" language or an emotional conversion story as proof that his Chrisitianity is inauthentic, these being hallmarks of a particular flavor of evangelical faith. Others point to his being on the "wrong" side of certain culture war issues such as marriage equality or abortion as proof that he's not a real Christian.

On the other hand, you have quotes like the one above from Wallis, who points out that progressive Christianity emphasizes God's regard for the poor throughout scripture, something that more conservative strands of Christianity only seem to be beginning to embrace.

Later in the article, Charles Kammer and Diana Butler Bass note how widespread President Obama's faith emphases used to be:


“The notion that religious people should be about feeding the poor and helping the homeless is a carryover of the Social Gospel,” says Charles Kammer, a religion professor at Wooster College in Ohio. The Social Gospel was adopted by many Protestant churches in the late 19th and early 20th century, says Bass, the church historian. Some of the Social Gospel churches grew popular because they provided the poor with everything from English classes to sewing instructions and basketball leagues.

The Social Gospel, though, sparked a backlash from a group of pastors during World War I. They were called fundamentalists. They published a pamphlet listing the “fundamentals of the faith:” Biblical inerrancy, the virgin birth, Adam and Eve.

But the fundamentalists lost the battle for public opinion during the “Scopes Monkey Trial” in 1925. John Scopes, a high school science teacher, was tried for violating a Tennessee law that prohibited the teaching of evolution.

Though Scopes lost, fundamentalist Christians were mocked in the press as “anti-intellectual rubes,” and a number of states suspended pending legislation that would have made teaching evolution illegal, says David Felten, author of “Living the Questions: The Wisdom of Progressive Christianity.”

Those familiar with American church history would know this: a type of Christianity placing emphasis on social justice, caring for the poor, equal rights for minorities, and on the thousands of Biblical texts calling God's people to care for the "least of these," the orphan, the widow, and the alien, has actually been around at least for a few centuries, but really much longer. There was a time, believe it or not, when complaining about keeping references to God on money and advocating equal time for creationism in schools weren't considered the most important items on Christianity's agenda.

This "different"--a word used later in the post which could have easily substituted "wrong" in the title-- style of Christianity is now being given fresh attention thanks in part to President Obama. President Carter was perhaps the last to embody this, and lo and behold, it was partially the rise of the Religious Right that helped suppress that level of public expression for a few decades.

This is familiar ground to people who have been reading the blog for a while. A certain strand of Christianity has dominated the public narrative for the past 20+ years, and now that progressive Christianity, which emphasizes other ideas and takes its cues from other Biblical texts, is finding a new voice--including among younger evangelicals--people aren't sure how to handle it. So media members who don't know any better ask if the president is the "wrong" kind of Christian and Christians who've enjoyed being part of the dominant public narrative say, "Well, it doesn't sound like what I believe or am used to so it must be wrong." This type of response shows a short-sighted view of history, a blindness to large chunks of scripture, and an ignorance of what millions of modern American Christians believe.

I honestly wouldn't expect the media to get that right, but I'd at least hope for dialogue and a certain amount of respect among Christians who take a different view. But the conversational climate in the U.S. being what it is nowadays, that would take a lot as well.
By Jeff Nelson
Email ThisBlogThis!Share to TwitterShare to FacebookShare to Pinterest
Labels: Justice Issues, Politics, Theology
Newer Post Older Post Home