Small Sips Put It Through the Uprights


I'm pretty sure I've never read a life changing tweet. Not one. And I'm certain I've never written one.

That's because the fullness of the Gospel will never be captured in a single sentence. Or a paragraph. Or a clever blog post. Or even a tacky three page Bible tract.

Instead, it lays itself out over a lifetime; threading its way between morning and night, quietly abiding our self created chaos and gently bearing our indiscretions. It seeps into our bones over time. It nurtures us slowly, whispering light into our dark places and shoring up our weak spots.

And the whole grand scope of Redemption can't really be conjured into a couple of words on the internet.

Now, I like playing those 140-character gospel games sometimes as well, and I'm sure that those who truly do try to save people's souls over Twitter is relatively small. Of course, I may also be quite naive about that, because people on the internet are weird and I try to avoid too much internet weirdness nowadays.

But Jamie hits it on the head when she observes that faith isn't pithy. Instead, it's nurtured and struggled with over a lifetime. Sometimes it needs words and sometimes it doesn't. And try as we might, it can't be crammed into our safe little boxes, cookies, Twitter apps, whatever. 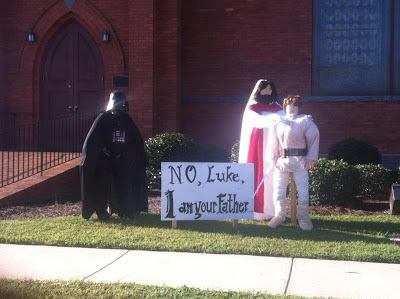 There's no follow-up comment. It is what it is.

VAGINA. Also from Matthew Paul Turner is a commentary involving a disagreement between Rachel Held Evans and Lifeway Bookstores:


Much of the current buzz about Rachel and her new book is about LifeWay Christian Stores refusing to carry the title because of the word “vagina”. And yes, that’s ridiculous on many levels. But of course there’s more to all of this than just the word “vagina”. There always is. And let’s face it, none of us are exactly surprised by this news regarding Lifeway. LifeWay has a long list of books that its refused to carry. Several of my books have sparked inside conversations between my publishers’ sales team and LifeWay’s buying team. One of my books was banned because of the word “masturbation” and another time it was because of a joke I wrote that referenced Baptists. Rachel’s in good company. Even Donald Miller’s “Blue Like Jazz” was banned AT FIRST. The popular title was deemed too controversial, too. But then it became too popular and a too “good of a sales opportunity” not to sell. So LifeWay’s moral code got trumped.

LifeWay has every right to stock what they want to stock. Some have called it censorship, and of course it’s censorship. Censorship is a part of LifeWay’s brand as a “Christian” retail establishment. Those who shop at LifeWay do so because they desire a certain level of censorship. Customers trust LifeWay to have screened the content that they sell. And they do. And trust me, they take that responsibility very seriously.

But regarding Rachel’s book, the word “vagina” is only the beginning of why LifeWay won’t carry the title. Another reason that we don’t like talking about is because Rachel has a vagina. Let me explain. Even before LifeWay read the first word of Rachel’s book, the fact that she is a female author, limited what those words were allowed to say and also to whom Rachel was allowed to say them to. Being a woman limits an author’s biblical platform according to LifeWay.

The only thing that would put Rachel at a bigger disadvantage on the front end would have been if she was a female pastor. A book by a female pastor wouldn’t have made it through LifeWay’s security checkpoint at the entrance to their Nashville offices.Why? Because LifeWay is owned and operated by the Southern Baptist Convention. The SBC has rules regarding what women are allowed to say and do. Those rules trickle down to the retail level, influencing what and whom LifeWay is willing to support and sell in their retail stores.

Okay, are you basically up to speed on what the issue is even if you've never heard of Rachel Held Evans or that she was involved in this disagreement? If not, here's the shorter version: a conservative denomination-owned bookstore chain refuses to carry a known Christian author's book about womanhood because it includes the medically-used term for a certain part of the female anatomy. Although I'm guessing, much as Turner does, that it has more to do with Evans' gender combined with her deigning to question what "Biblical womanhood" really is.

I'm somewhat familiar with the tendency toward the sheltered reality that certain parts of the Christian subculture prefers. This applies to terms that it finds icky, but of course it also applies to theology or questions about theology that it finds icky. Somehow Driscoll's boorish descriptions of and advice about sex and gender "complementarianism" get through but Evans pushing back against such viewpoints and asserting herself as a woman doesn't.

And that's the double standard that such a subculture thinks it needs in order to protect itself.

Win #900. The winningest college football program hit a milestone this past Saturday against its in-state rival Michigan State. It wasn't a very pretty game, but in the end Brendon Gibbons was clutch in hitting a field goal in the closing seconds, helping notch the 900th win in program history and also snapping the last remaining losing streak to a rival.