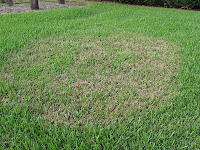 My lawn is kind of brown.

This time of year, that's to be expected. Depending on the type of grass, it turns brown while going into hibernation just like a lot of animals, lying dormant and awaiting spring. That's the basic earth science answer.

A couple weeks ago, I stood at my window for a while, coffee in hand (of course), just looking around at my yard. I certainly wasn't watching it grow, both because it wasn't going to and because that'd be about as exciting as watching paint dry. No, I was just having one of those moments where I felt moved to just look out at my little subdivision landscape, contemplating the small fir trees in the far corner and the frost evaporating in the morning sun.

It's not completely brown, you understand. There are just patches of it here and there and, by my assessment, those patches have been there since the scorching summer temperatures turned them that way. I barely had to mow but two or three times during those months with how hot it was. When the fall rains came, some green returned. But some of it never seemed to recover. I imagine that those patches will turn green again come spring, but it may take some time yet.

There were parts of this past year that have left brown patches in my spirit. They were the sorts of moments borne of bad decisions and rough ministry moments, of unexpected times of learning and growth. I'm speaking in generalities because describing specifics doesn't seem blog-appropriate. You can at least read about some of the lessons I've learned if you look back through the year's archives. They're the stuff of brown patches slow to grow back and regain life.

For quite a long time, I hated New Year's. There were times when this particular holiday only seemed to remind me of my own loneliness as endless shots of happy crowds in revelry would flash across the TV screen in between Dick Clark's award-winning smile, along with the expectation that you need to have someone by your side at midnight. The years that I didn't caused a loathing of this day to fester, and after a while I started to question the larger concept that a minute passing would suddenly change everything. How dramatically different is one year really going to be from the last? How much are we deluding ourselves by thinking this way?

I find myself greatly softening on that bitterness of late, especially as this year comes to a close. This coming year really is going to be dramatically different from the last, with the transition to a new church quickly approaching. That will entail certain other changes such as yet another new house and community. As if that wasn't enough, Coffeeson will start kindergarten in the fall, which will bring its own set of changes, challenges, and opportunities.

Will any of this restore my brown patches to green? I'm not going to go so far as to say yes. For better or worse, I do think that physical changes translate to spiritual ones. But in this instance I'm not looking for one to lead to the other. I suspect that what will really bring restoration is reflection that will lead to better practices the next time; distance that heals and brings better perspective.

As with grass and with New Year's, that doesn't happen overnight.
By Jeff Nelson
Email ThisBlogThis!Share to TwitterShare to FacebookShare to Pinterest
Labels: Church, Ministry, My Journey (so far), Quotidian
Newer Post Older Post Home