Yeah. Me too. Katherine Willis Pershey lists ten things that she loves about being a pastor:


10. This is what I'm called to do, by a loving God who has extended so much grace to me through this vocation. I felt very unworthy of this calling throughout seminary and my first years in ministry, but I echo the sentiments of Martin Copenhaver, who writes in This Odd and Wondrous Calling, "I do believe that, by donning such a role and by doing those things that are associated with such a role, being a pastor has made me better than I am." It is such an honor to serve Christ by serving in the local church, and I wouldn't want it any other way.

There are nine others, of course, but this one sums it up. This is the type of post for pastors to bookmark in those inevitable moments where we wonder, "Why the hell am I doing this again?"

This. A hundred times this. Jamie the Very Worst Missionary reflects on depression:


This morning I shuffled around my house looking for some unknown thing, circled the internet in search of nothing at all, and told myself repeatedly to “get it together”. When none of that got me anywhere, I prayed, telling God repeatedly to “get it together”. I need to write, I said. I need to cook. I need to buy toilet paper. This grimy, stupefied, agoraphobe thing isn't really working for me. I don't have time for mental illness, I told him. You're gonna have to make it go away.

And then I remembered the one thing some Christians will never admit out loud, which is that sometimes Jesus isn't all you need. Sometimes you need Zoloft.

I've fought with anxiety and depression for as long as I can remember (seriously, like since I was a small child) and I know the things I need to do to escape this ditch. For me it requires healthy food, sunshine, exercise, safe friends, and, yes, Faith in my Healer and Counselor.

But, sometimes, it also means addressing the chemical needs of my body.

And guess what? It helps!

I can recall a fellow Christian once telling me, "I don't believe in mental illness, because I don't believe that God makes junk." Hopefully readers can spot not only the terrible theology in that statement but also its abusive qualities as well. How would that statement sound to someone wrestling with depression, who perhaps is already feeling like "junk?" When God created the universe in Genesis 1, God proclaimed it all good. Does struggling with depression negate how God sees us? I'd say no.

Not only does mental illness continue to carry a huge stigma in society in general, but it seems to be amplified in certain corners of Christianity due to the reasoning, as Jamie observes, that "Jesus should be enough." How much has that phrase, or the other mentioned above, added to one's suffering more than it's helped ease it? I'd wager quite a bit.

Human beings need to be thought of holistically, and need to be cared for accordingly. That means spiritually, physically, emotionally. That doesn't somehow lessen God or Jesus. I'd say it's what God wants us to do. 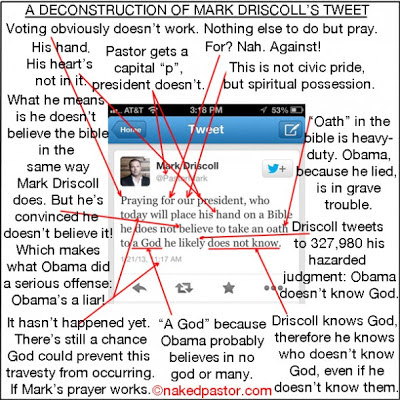 Heart problems. Rachel Held Evans writes about what really caused her to question the culture and ethos of evangelical Christianity:

If you’ve read Evolving in Monkey Town, you know that the public execution of a woman named Zarmina in Afghanistan marked a turning point in my faith journey. The injustice of the situation was troublesome enough, but when my friends insisted that Zarmina went to hell because she was a Muslim, I began wrestling with some serious questions about heaven, hell, predestination, free will, God’s goodness, and religious pluralism.

Evangelical apologists were quick to respond. And while their answers made enough sense in my head; they never sat right with my soul.

Why would God fashion a person in her mother’ s womb, number the hairs on her head, and then leave her without any hope of salvation? Can salvation be boiled down to luck of the draw? How is that just? Shouldn't  God be more loving and compassionate than I?


See what Jamie writes above about mental illness for further reflections on the heart issues that certain Christian traditions are having.

This type of thing goes all the way back to Jesus, when people asked him questions such as who sinned to cause a blind man to be born blind, or whether the Galileans on whom the tower of Siloam fell were worse sinners than anyone else. Maybe, rather than root out the sin that obviously caused this horrible thing, Christians are called to sit with people without talking; maybe weeping instead. Some people can't help themselves, though, and that's a shame for all of us. To say the least.

I...uh... Gordon Atkinson continues his series on becoming Episcopalian, including not knowing all the rubrics of the worship service when he first shows up. And he drops this thought in the middle of it:


Because here’s the deal: do you really want to go to a church for the first time and understand everything that’s going on? Do you really want to walk into the most sacred hour of the week for an ancient spiritual tradition and find no surprises and nothing to learn or strive for? Do you really want a spiritual community to be so perfectly enmeshed with your cultural expectations that you can drop right into the mix with no effort at all, as if you walked into a convenience store in another city and were comforted to find that they sell Clark Bars, just like the 7-11 back home?

I do hope you’ll give this a little more effort than that. Because something wonderful can happen when you stop trying to figure out what you should be doing in a worship service. When you admit to yourself that you don’t know what’s going on, you’ll just sit and listen. Because that’s really all you can do. And that’s actually a very nice spiritual move for you to make.

This flies in the face of what churches are being encouraged to do nowadays, which is to spell everything out as clearly as possible so that newcomers don't feel so out of place. It certainly flies in the face of what I strive to do when putting worship together. I've long kept in mind a thought from Nadia Bolz-Weber that people shouldn't have to "culturally commute" when they enter the church.

But really, they do anyway. Gordon's point is that church is a foreign place in our culture, and a certain amount of strangeness felt by those curious enough to wander in is going to happen. And at that point, one has a choice to listen and explore and do some homework, or to give up. Maybe those aren't the only two options, and those who do know what's going on should at least be ready and willing to help, but I like that he pushes back against some of the church's attempts to make worship as simple as possible for visitors. I'll be thinking about this one for a while.