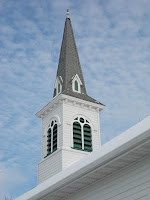 I fondly remember my seminary years as a great time of personal growth; of deep wrestling and discovery of who I am. The classwork mostly was engaging, the field education was hit and miss. So many years after the fact, I can look back and see that it was more the experience of the big city and its cultural diversity and my summer of Clinical Pastoral Education that I really credit with this. From time to time I like to say that my years at Eden helped me learn who I am as a person.

Over the past eight years, I've been learning to be a pastor. Many may think that this is what seminary is for, but when the driving model of pastoral education is classroom study coupled with a relatively minimal amount of hours spent in a ministry setting, there's only so much practical experience that you can gain from that model. It's a fairly common wish among new pastors that seminary had focused more on administration, for instance. We have to learn those things as we go.

There are many scenarios that seminary simply can't cover. How to oversee an elevator project. How best to help a person struggling with finances. How best to rearrange your week when a funeral pops up in order to give proper care to the grieving and get your work done. How to deal with an overly demanding bride. How to work with your critics. Sure, there could have been more pointers given for some of these things, but you don't really know until you find yourself in the specifics, and you still may not know after you've given it your best shot. Ministry is an art rather than a science. We practice it as best we can, however imperfectly, hoping that instincts develop over time so that we're able to do it better.

I now have just under six weeks remaining at the church where I learned to be a pastor; where I started to develop these instincts myself. My office is becoming bare and overrun with boxes, the first carload set to go out to the new church later this week.

It depends on the moment how I feel regarding how close this change is getting. At times, I'm feeling more reflective or sad as I think about the over eight years of memories, relationships, and learnings from which I'll be moving on. At other times, and even admittedly more frequently, I'm getting excited about the possibilities of beginning again, of creating new memories and relationships. And in part, I'm excited to see how experience gleaned thus far will play in a different setting, as well as the new experiences that I'll gain there.

The difference in gained experience in a new place is that a certain amount of it won't be new this time around. At my current church, most of what I've learned was for the first time: my best routine for sermon preparation, best approaches to planning weddings and funerals, how best to respond to notification of hospital stays, conducting Bible studies, running a confirmation program. These are the sorts of things that probably won't change a whole lot; I won't have to re-learn them.

And now I'm learning my last first thing: how to leave well. This has been complicated and even hindered a bit by Advent and Christmas, as those seasons tend to occupy the church's time and energy, leaving little inclination to think about transitional issues. But even in the midst of that, as I learn to entrust certain responsibilities to others and watch from the outside as Consistory goes through the process of securing an interim, as I write newsletter articles explaining what I can and can't (mostly can't) do after I leave, as I make plans for that final worship service, I'm learning that paying attention to this last thing is important. You can't just up and leave; there's still important work of transition and healing to do in these final weeks.

In some ways, this work is harder than some of those others because it signals an end. But it's no less important to learn. As with so much else, I'll be glad to have learned it here.
By Jeff Nelson
Email ThisBlogThis!Share to TwitterShare to FacebookShare to Pinterest
Labels: Church, Ministry, My Journey (so far)
Newer Post Older Post Home