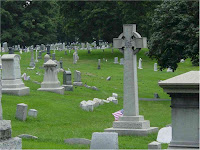 While anticipating my upcoming transition, I've been thinking about this entry a little. I still wonder about whether it's possible--or maybe even desirable--for me truly to plant myself somewhere.

As a pastor, I've visited a lot of cemeteries.

It's an inevitable part of my vocation. Somebody calls me to let me know that their wife, husband, father, mother, grandparent, sister, brother, or whomever died. I get a call from the funeral home maybe a day later, at which point they tell me when and where the service is taking place, and where the burial will be. The location of the service is usually a predictable choice between the soft pink lights and soothing piano music on CD of the funeral home, or in the sanctuary of the church. It makes no difference to me, really. Funeral home services are much shorter due to the general lack of hymns and corporately read prayers. Every once in a while somebody would like a favorite song sung together, or at least as much as people are up for singing. But for the most part, they're about half as long as a church service which, as you might expect, is normally held at the request of member families who couldn't imagine the one for whom they grieve not being commended to God from the pews in which they sat for decades.

No, the place where one's life is celebrated, stories are shared, scriptures and prayers and songs are lifted is a fairly predictable choice for me. In that sense, I know what to expect and plan for as soon as I know what the people want. The place of burial, however, is almost a guessing game. I've been to perhaps a dozen or so such places in the area, and it could be any of them, or some new place I've never experienced. Depending on where we end up, we may say final goodbyes in a chapel, under a pavilion, or under the green tent with minimal padded seating. We may stand near a vault or over a rectangular hole. There may already be the stone memorializing a spouse, parent, or child close by, to which the departed will now be enjoined at least in a symbolic way.

My favorite to visit is probably the nearby national cemetery. Like any military cemetery, the word that defines one's entire experience there is "precision." When the funeral caravan arrives, it must stop next to a front office building where the funeral director delivers papers and waits for the Go signal. Then, on the half hour, we make our way through the perfectly-aligned rows of markers and vaults to a pavilion where a small group of veterans awaits. Military honors are conducted first, and before I open my prayer book I am reminded that I'll be cut off if I go too long in order to prepare for the next group when the half hour hits once again. I always approach this with an extra sense of honor and privilege that is much less due to the strict schedule and much more for the simple pageantry and elegance of it all. I can say this about all cemeteries that I've experienced, really. But this is a unique place for me.

The church has its own cemetery of respectable size whose residents go all the way back to the congregation's founding. Ours is typical of most non-military cemeteries: smaller markers of faded limestone are generally relegated to the side closest to the road, overtaken more and more by larger, modern works of granite and marble. Brass stars slowly turning green from age mark where our veterans are all year, but small American flags are added just before Memorial Day and remain through Veterans Day. Familiar names that go back generations litter the landscape, inviting questions of relation to those still on the rolls. Decorations are modest, usually featuring a few floral arrangements or, in some cases, a tree or bush planted in one's honor. More recent markers are personalized with pictures of the deceased, familiar quotes, symbols of favorite hobbies, beloved civic groups, or one's faith.

And I could tell you about the pastor. We have at least one buried in our cemetery, and his memorial identifies him so. He ministered to our church for over 25 years, a mark that no other pastor has even come close to meeting. The name is recognizable because no less than four generations of his family still attend and serve in various roles, though not in the stereotypical way one may associate with big families and small churches. He's buried right next to the church, clearly visible from both the sanctuary and office windows, almost as if he's keeping watch over whomever fills the pulpit forever after.

I think about this pastor often. I never met him, so I don't think about his life so much as what it took for him to be buried here in our cemetery.

Where you are buried is your last identifying gesture. You are forever linked to the nearest community, and even long after people's memories of you fade, that is still where the remnants of your physical self will reside. You will be visited by loved ones who will decorate, clean, stop to remember; wherever they live, they will always need to travel to that spot. Later on, that same spot may be visited by genealogy enthusiasts searching for ancestors and constructing family trees. Eventually children may hold a piece of paper up to your gravestone and rub a crayon over it, and they probably won't know you at all. Whomever comes to visit, they'll visit you right here. And in most cases, you're buried where you are because it's close to where you lived, where people knew you and valued you and could tell embarrassing stories about you. More often than not, you are buried close to home.

Except in the most tragic circumstances possible, I don't anticipate being buried in my church's cemetery. It would only be some unexpected event that would dictate my final resting place being close to this other pastor. Something would have to happen to me, or something would have to happen to Coffeewife or Coffeeson that would automatically cause me to decide that this is where I will rest when my own time comes. Barring that sort of thing happening, though, I have no idea where that plot will be secured. I don't know where life, let alone death, will take me.

I sometimes wonder where my final stop will be. I wonder if it will be a place that I've known and that knows me, where we valued each other and where people will tell embarrassing stories about me. I wonder if I'll be buried in a place that I could come to know for years or even decades, where there will be people to leave flowers for me and linger to remember who I was for a while. I wonder if it will be a church cemetery after all, where my memorial will say "Pastor" and generations of members will be able to tell children and grandchildren about me, how maybe I was a trusted friend or how I always wanted to drink the regular coffee or how I always had weird ideas about church and worship and Jesus. I wonder if I'll be known that well close to where I'm buried.

I wonder if I'll have grown roots before I'm in the ground.
By Jeff Nelson
Email ThisBlogThis!Share to TwitterShare to FacebookShare to Pinterest
Labels: Vintage CC
Newer Post Older Post Home