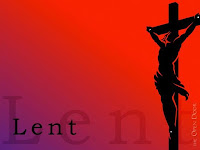 I must say that the past few Lenten seasons for me personally have been...underwhelming.

I used to be incredibly gung-ho about taking on a discipline for Lent, be it giving something up or taking something on. But the last few years I haven't really given myself to a practice the way that I should, to my own spiritual detriment, I think.

So many people nowadays seem to push back against taking on a Lenten discipline. "Don't take it too seriously, you don't want to kill yourself." Or, "what you're doing (giving up Facebook or chocolate) doesn't take Lent seriously enough." If attempting to choose something wasn't difficult enough, the rise of the Lenten Discipline Critic seems only to have made things worse. There may be some reading this thinking, "What's the big deal? Who cares?" But I myself love the intentionality of a practice during these 40 days as a way to move through the season.

Well. Yesterday was Ash Wednesday. Lent is here once again. And yesterday morning I was still trying to figure out what I wanted to observe over the next month and a half.

While doing so, I happened upon a colleague's Facebook page touting something called "The 40-Day Creativity Experiment." The gist is that you choose a creative medium: paint, collage, drawing, writing, etc., and you work a little on the same project every day. It could be for a minute or 20 minutes, but you stay with the same project and see where you end up. The process of creating is the point; you're not required to have produced a masterpiece by the end.

This intrigued me, and I started to think about what I might do. I could attempt to recover a long-lost love of drawing, I could write a story or a poem...

Or I could write a song.

Now, those of you who are musically inclined may look at that and think, "40 days to write a song? Pshaw, I could write a whole album in that much time!" And good for you, overachievers with natural ability. I, on the other hand, have not given myself to my instruments lately the way that I think I should: I play a few little choruses on guitar every Sunday (though there is fast approaching a break in that particular activity), I've long given up bass lessons, and my drums have been sitting in the corner neglected for God knows how long. And outside of a few praise choruses, I haven't written a full-fledged, complete, performance-ready song...ever. I have a few ideas and snippets, but not a song song song.

So. For the next 40 days, I'll write a song. With words and chords and everything. Or at least I'll try. And if you're good, I'll find a way to post it on here at the end.

Unless it sucks. Then not so much, probably.

Have a blessed Lenten season.
By Jeff Nelson
Email ThisBlogThis!Share to TwitterShare to FacebookShare to Pinterest
Labels: My Journey (so far)
Newer Post Older Post Home