None of them about unladen swallows, surprisingly. Jan suggests that there are three questions that every church must answer:

After an excellent weekend spent with core leaders from four congregations, it occurs to me that every spiritual community could benefit from asking the following three essential questions:

Note that they're deeper questions than, "How do we get more young families?" or "How do we boost attendance?" The questions Jan wants to ask try to get at the core of why a church does what it does; its sense of self, its sense of mission to the community, and each member's sense of personal faith. There are other possible questions, but these three are a good start.

What Gen-Xers Want. Tim at Black Coffee Reflections reflects on what those deemed "Generation X" are interested in as far as church and mission goes:


Some will tell you that it’s because Gen X’ers and Millennials are not interested in sharing their faith or as one person shared with me, “I’m concerned your generation has lost its heart to evangelize the lost.” It stung when he said that and it must have stung him when I replied, “That’s tough to hear. But is it more because you never hear anyone my age say that sentence? Because “evangelize” sounds like a lot like ‘proselytize’ and I never call anyone ‘lost’ – it’s an unhelpful and often condescending label.”

I assured him I and so many other young(er) believers have a heart to share the Christian faith but it really was about sharing – not just sharing my creed, but also about sharing solutions to needs. My generation cannot fathom the idea that almost 1 billion people don’t have access to clean drinking water. We cannot understand how human-trafficking has become the issue it has become. And we don’t understand why some seem more concerned with wearing a hat in church than helping the marginalized. I had no intention of offending him nor do I feel compelled to defend my generation, frankly we could all use all the help we could get but I do think these issues are so important and that we need to come together and serve together. It ended up being a good conversation but I’m sure we both left feeling the generational disconnect.

Tim is writing out of more of an evangelical tradition where social justice is this crazy newfangled idea for many, and he illustrates the problem many still have with it in the quote above.

So, how might generations serve together? Tim leaves that question unanswered. But it's one to keep in mind. A first step would be to strive to understand one another, which is always a concern. 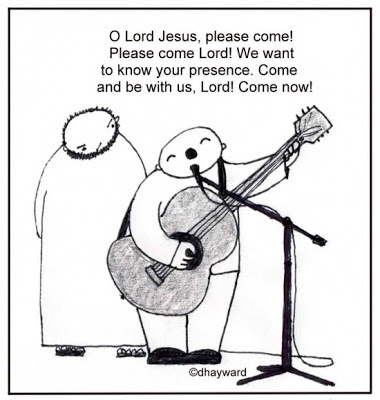 How to do it? Rachel Held Evans has a post up with Shane Claiborne's answers to readers' questions. I'm guessing that more than three were asked, and I again didn't see any about unladen swallows. Anyway, the first is about how to do something sort of like what he does except, you know, without having to relocate to an intentional commune in inner-city Philadelphia:


I love this question. What pops into my head is that Scripture that says, “let us not be conformed to the patterns of this world, but be transformed by the renewing of our minds.” And to me, that’s invitation to live with imagination. Non-conformity doesn’t mean uniformity. Choosing non-conformity doesn’t mean we’re all going to end up doing the same thing, that we’ll all find ourselves working in a soup kitchen, or sleeping under a bridge. This is an invitation—a call— to re-imagine who we are and how we are to live in light of Jesus. And I get excited because I see folks who are doing that everywhere, in all kinds of different ways.

You also see in Scripture that when people encounter Jesus, they don’t all walk away to pursue the exact same lifestyle. For instance, Jesus dealt with two tax collectors—Matthew and Zaccheus. Matthew chose to sell everything, but Zaccheus, from what we know, sold half of everything, paid everyone four times what he owed them, and then went on. So they both reimagine their life and their economics, and they both challenge the system, but they did it in different ways. And you’ll notice that Matthew didn’t get all upset and come out and tell Zaccheus how to do it! (laughter)

So what this means is that every one of us is called to love our neighbor—including our global neighbor—as ourselves. I know a suburban mom who, for every biological kid she and her husband send to college, they’ve create a trust fund—kind of like another scholarship—for a kid that’s not biologically theirs, but is financially hard-pressed. I know another mom from California who was in this collective with a group of other parents who said they wanted their kids to learn compassion, so once a week they would gather together in a local park to discuss issues related to social justice and also to serve lunch to whoever might need it. One day, the police came and said that they couldn’t serve food in the park, so then it became a lesson on civil disobedience!

That's pretty much the long and short of it: following Jesus is about attitude, and intentional habits cultivated over time that reflect your ability in your context. Not all of us are called to be Ghandis and Mother Teresas. We're called to be instruments of justice and peace where we are, according to our own situations.