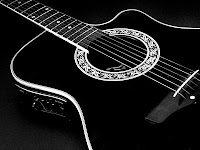 As my Lenten discipline this year, I chose to take part in the 40-Day Creativity Experiment, where you're encouraged to work a little on the same art project every day for 40 days. You may recall that I chose to work on writing a song.

To be honest, I've been surprised at how well this has gone so far. I thought I'd get tripped up just on finding the melody for the first few weeks, but I came up with a nice little chord progression and the whole thing has just kind of flowed from there. I seriously am planning to share it here after Easter, whether that entails figuring out how to use Garageband on my Mac or doing something with Youtube.

Really, this song has ended up being part of a larger Lenten happening. A big part of it is musical: making it a point to strum my guitar for even just a few minutes each day has helped me rediscover a love of playing that I think I lost for a while. I approached it more as an obligation as part of ministry and didn't play a whole lot outside of a single quick weekly practice before worship. I've been breaking out my binders of chord charts again; feeling the kind of excitement that I recall having back when I was still teaching myself how to play in my seminary apartment.

I've been working on a second song. I've had the chord progression in my head for years but never figured out what the song should be about. I have it figured out now.

The other part of the larger Lenten happening has been my transition from one ministry to another. As it turns out, eight years in one place brings with it a need to decompress, process, and come to terms with not being there for a group of people any more, especially when something sudden, unforeseen, and tragic happens to them, which was the case this past week. Boundaries are a complicated, sometimes frustrating, ultimately needed, but still difficult thing.

Don't misunderstand: I'm very excited about where I am now, but I'm also working through some natural and inevitable feelings of loss. Perfect for Lent, right?

So. These songs. The first is about moving on from one place to another; reflections on a life that really features a lot of such transitions and what may ground us in the midst of it. The second song is about the experience of watching something or someone you love from afar.

I didn't plan for this. It just happened. That's what this creativity experiment is about: just letting stuff happen. And for me, it's been an unexpected blessing.
By Jeff Nelson
Email ThisBlogThis!Share to TwitterShare to FacebookShare to Pinterest
Labels: My Journey (so far)
Newer Post Older Post Home