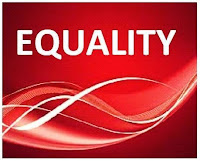 This week being Holy Week, Christians have certain themes on their minds: palms, hosannas, last suppers, the cross, Easter eggs and lilies, special services to attend (or plan), and so on and so forth.

It may also be that during this particular Holy Week, Christians are thinking about other themes as well, in light of what the United States Supreme Court has been deliberating over the past few days. It should be noted, however, that people of faith in particular do not think universally about this subject: we aren't a unified voting bloc on this. That may come as a surprise to Christians and non-Christians alike, not to mention no small amount of anger and indignation.

Certain corners (again, both Christian and non-Christian, believe it or not) pointedly say to Christians who support marriage equality: "You either believe it all or you don't believe any of it!" It's incredibly simplistic, leaving no room for nuance. Such a statement doesn't allow for theological or experiential complexity, threatening more conservative understandings of faith for some Christians and burning down favorite straw men for non-Christians, to the frustration of both.

The purpose of this post is not to give an exhaustive theological and Biblical treatise for marriage equality or for why I don't think homosexuality is a sin. I thought instead that I would just tell you the story of how I came to such an understanding. This is probably the plainest I've ever written about this subject here, but I figured it was time to be more candid and up front about certain things.

Even though I grew up a pastor's kid, I didn't really get serious about my faith until high school. That's when I really started to wrestle with what all this Jesus stuff meant to me. Such wrestling came chiefly in two waves. First, the persistence of my girlfriend at the time wanting to talk about such things, which eventually got me past the initial eye-rolling into eventual real questioning, and a Christian concert I attended the summer before my senior year, where it all really started to click.

At frequent points during this concert, the lead singer would stop to talk to us about different faith-related subjects. The context of it is lost on me now, but there was one point where he threw out the, "I believe it was Adam and Eve, not Adam and Steve" line, the first time I had ever heard it. And I thought at the time that it was so clever and in-your-face that I laughed and clapped right along with others.

In those days, simple, clever, and in-your-face worked for me, faith-wise. Part of it was that I was still figuring things out, but I also enjoyed being a part of something and being clear about what being part of that something entailed, belief-wise. It's common in the early stages of faith development to enjoy that, to want answers and, once you think you've found them, to cling to them unquestioningly in order to maintain that sense of belonging and clarity about how the world works.

This sense of belonging eventually involved actually being pointed to the scriptures that purportedly condemn homosexuality. It started simply enough: a Christian friend and I were working together at the local library and, as we were shelving books, she said, "Did you know the Bible says being gay is a sin?"

She ushered me over to the religion section, grabbed one of the Bibles, and pointed a few of them out to me, Leviticus mostly. In my as-yet still infancy phase regarding taking my faith seriously, I didn't question this too much. I do recall getting in an argument with each of my parents--that is, two separate arguments, one with each of them--about what the Bible says on this topic. Okay, with my father it was more of a discussion, during which he said, "Some people take the Bible to be God." I've always remembered that. And it put enough doubt in my mind about what I was arguing for to make me wonder.

College is a time of transition and exploration, and my faith was privy to this as much as anything else. I've referenced this part of my journey many, many times on the blog over the years. The short version of this part of the story is that I discovered new ways to read the Bible and to consider what it says, accounting for context, the nuance of word translation, and modern scientific and historical methods and discoveries, among so much else. I knew several GLBT people at that time, who were...get this...normal. Or as normal as one could be in the circles I ran with back then. All of this cast further doubt on what I'd believed earlier, causing me to rethink whether such a blanket statement could be issued for a group of people, removed from context of both the Biblical passages used and the stories of those so many rush to condemn.

It was my trip to my first General Synod of the United Church of Christ that really brought things home for me. I was a delegate that year, and ended up getting off the plane in Kansas City with a fellow Ohioan. He wasn't a delegate, but was there to help out with some of the youth activities. We rode the shuttle from the airport, chatting about common acquaintances. It was the summer after I graduated college, so I told him a little about my plans to go to seminary and enter ministry.

We eventually ended up at the car rental place, where he offered to give me a ride to the hotel and then to the convention center. At some point during all this driving around, he disclosed to me that he was gay, and I was privileged to hear a little of his story. As is often the case, such a story involved a lot of personal struggle in discovering and admitting this about himself, including some heartbreaking ends to relationships that he'd held dear. There of course was no language of "choice," of deciding that he liked one "lifestyle" better than another. Instead, I recall language of identity: "I figured out that this is who I am, and I had to be honest about that."

This was the biggest turning point for me. And really, it didn't come with a grand "Aha!" sort of realization, a light from heaven, a lightning bolt to the brain, or anything else. It was more subtle than that: I simply allowed this story to sink in, to confront all that I had thought and said about homosexuality before then. It was a moment that drove home the truth that I'd already known: that one cannot approach such an issue, let alone real live flesh-and-blood human beings, simplistically or hide behind what is usually fear of what is unfamiliar or strange to us.

Putting a human face on something that I earlier only knew by way of a handful of Bible verses and an "Adam and Steve" joke made a big difference. In fact, it made all the difference. I'd have the privilege of hearing more of these sorts of stories in subsequent years, and being able to call many GLBT people good friends. And as I enjoy such friendship; as I work or laugh or simply be alongside them I can tell you that they are fearfully and wonderfully made by God. But the thing is that I don't have to tell you, because our faith makes such a claim apart from my having to say it.

So here I stand. I call myself their ally. And I believe in their equal right to love whom they're meant to love, as they have first been divinely loved.
By Jeff Nelson
Email ThisBlogThis!Share to TwitterShare to FacebookShare to Pinterest
Labels: Justice Issues, My Journey (so far)
Newer Post Older Post Home