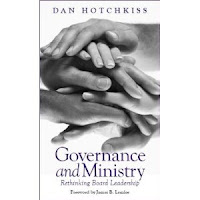 My church is looking into revamping its constitution and bylaws--and possibly its governance/committee structure--so I thought I'd pick up Dan Hotchkiss' Governance and Ministry: Rethinking Board Leadership in preparation. It came highly recommended by multiple colleagues, and I'm a bit of a church administration nerd (I know...weird), so I started reading. I'm about halfway through, and it's been quite interesting. Hotchkiss first summarizes the structures that churches of different sizes may be used to, the most prominent being variations on the "governing board and committees" model. Hotchkiss then analyzes the two main functions of any of these structures: governance (setting and maintaining policy) and ministry (anything practical: worship, mission, education, etc.), and suggests that the traditional committee structure is no longer necessary or most effective to address them. It's very informative and thought-provoking so far.

Coffeewife got the DVD of Breaking Dawn Part 2 pretty much right when it came out, and as happens every time one of these comes out, I end up watching it with her. As Twilight movies go, this was probably one of the better-directed, more action-filled ones, which helped make it more tolerable for me. Coffeewife had already filled me in on everything that happens, including the big scene that apparently caused a bunch of people to walk out of the theater before they realized what was going on (LOL Twilight fans got trolled by their own movie). So everybody lives happily ever after, the movie and book series are both over, amen and amen.

This past Sunday on The Walking Dead, we caught up with Morgan, the father from the earliest episodes. Things...have not gone well for him. It was kind of a standalone episode where Rick, Carl, and Michonne go on a mission apart from the conflict with Woodbury, which I thought served to do two things: resolve what happened to Morgan and his son, and make Michonne more a part of the group. In the case of the latter, she showed a lot more personality which I really liked. As fun as her sitting around scowling at everybody when not cutting zombies' heads off has been, she seemed more human this past Sunday. So I guess it's back to the Woodbury stuff this week.

Here's Serena Ryder's video for "Stompa." See below for more:

Beats Antique, Beauty Beats - What do you get when you combine Eastern music, electronica, bellydancing, and steampunk? You get...this. I happened upon the title track to this album on Youtube while watching something else, and figured I'd give the whole thing a listen. It's a very mellow sort of album, good for slowly waking up to while sipping coffee.

Serena Ryder, Is It O.K. - I recently watched a video of Ryder performing her latest single "Stompa" (see above), and had one of those HOLY CRAP I HAVE TO LISTEN TO EVERYTHING THIS PERSON HAS EVER WRITTEN moments. I've since calmed down, in part because the album that that song appears on hasn't been released in the U.S. yet (she's Canadian). So I had to settle for this album from 2008 on Spotify instead. While "Stompa" is more of an Adele-rocks-out sort of sound, this album recalls Melissa Etheridge: more gritty and straightforward rock. I liked it just as much, but I'm gonna keep looking for opportunities to hear Harmony, too.

Ellie Goulding, Halcyon - I heard one of Goulding's songs, "Hanging On," during a video game commercial, and out of curiosity looked her up on Spotify. First off, I hadn't realized I'd already heard her song "Anything Could Happen." Overall, her sound is ethereal, electronic pop, and it's the ethereal part that caused me to like it. If it was the dance-y stuff that Coffeewife likes, probably not so much.

Weezer, Pinkerton - I've been on a bit of a Weezer kick lately, so I figured I'd go back and listen to some of their stuff that--to my shame--I've never heard. So we start with this harder-edged follow up to their breakthrough self-titled "blue album." As I recall, not a lot of people liked this one. But this is the harder, crunchier kind of Weezer that I like, so I took to this one pretty quickly. On top of that, there's an emotional depth to this album that the band hasn't seemed to have attempted since. So, crunchier/deeper Weezer doesn't play well to the masses, eh? It'll be our little secret, then.

Weezer, "the red album" - I haven't made up my mind about this one yet. It doesn't seem like all the parts fit together. I know they were trying to get away from formulaic songwriting on this one, but doing so is not always a good or needed thing. This'll take a few more listens, methinks.
By Jeff Nelson
Email ThisBlogThis!Share to TwitterShare to FacebookShare to Pinterest
Labels: Pop Culture Roundup
Newer Post Older Post Home