"The Crumbs of Our Cooperation" 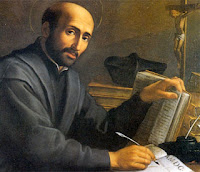 I probably don't write about my spiritual direction program on here enough. This is me attempting to change that.

This past Saturday, my class had an all-day workshop with Rev. Brian McDermott of Georgetown University. It was our second workshop with him, and I've found him very enjoyable both times. He's very personable and has a great sense of humor, in addition to being incredibly knowledgable about the subject matter.

This weekend, McDermott went over Ignatius' thoughts on "election." To someone like me with a Reformed background, we may jump to a certain definition of the term having more to do with who God chooses to save. But the way Ignatius uses the term is more about the choices that we make after discerning God's will for us.

For Ignatius, this process of election has a double edge. First, election is for we ourselves; we cannot discern what is right for another person. For example, one may decide that he or she is called to a particular church. But there is more than one agent that has to discern that to be the best option; one cannot simply wander into a church and say, "God has called me to be your pastor." The congregation has to do its own discernment and come to a likewise conclusion.

At the same time, however, one is not meant to discern by oneself. For Ignatius, election is meant to be a matter of "we," that is, me and God discerning together. It is not me discerning and then asking God to chip in or approve what I've already decided. God, McDermott shared, is not like a flashlight that we take off the shelf when we think we need it only to be placed back on the shelf again later. Rather, God is meant to be ever-present in our decision-making.

One of my favorite parts of the day was when McDermott described how God uses whatever we offer God. At times (or always) we want to withhold parts of ourselves from God, going into self-preservation mode at the risk of discerning something we don't want. Regardless, McDermott shared, "God works with the crumbs of our cooperation." I loved that line; it's going in a sermon at some point.

One of my other favorite parts of the day was when McDermott described the two images of the process of election and discernment. One common view is that God has a fixed plan for each of us and we go along with what God has already mapped out. On the other hand, God may work with us more the way jazz musicians work with one another: there's a general framework, but room for improvisation, new ideas, and responding to one another in a much more dynamic system. This latter view played to my process sensibilities, and recalled for me a book that I read years ago using this same metaphor.

If I had one qualm about the workshop, and/or about the way Ignatius approaches discernment, it's that I didn't hear much of anything about communal discernment. It's been my experience time and time again that one can't do the work of discernment in isolation. Instead, one must look to others who know us best or who are in trusted positions to help us discern; who will point out our blind spots and offer support and pushback. The example given of pastor and church approached this, but doesn't fully address it. I did ask about this and was referred to an article, which I've yet to read. I hope that it will provide clarification.

All in all, there was so much about this workshop and there has been so much about this program that has been edifying and renewing, and the first year isn't over yet. There were so many great quotes and pieces of information shared over the course of one day that I'm tempted to share them in bullet points, but 1) this would get pretty lengthy, and 2) I might not be able to capture the context of them well enough for them to make sense.

However, I can share video where McDermott shares some of this material, including the jazz band metaphor that I mentioned. This isn't from Saturday, but it gets at the same points: