A Song Shall Rise 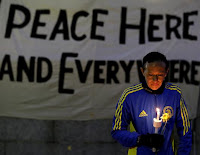 Mondays are Coffeeson and my day to hang out. I take that day off, and we spend it running errands, visiting our favorite donut shop, watching movies, playing with action figures, and whatever else we feel like doing. There isn't a whole lot of time to watch much grown-up TV, but social media addict that I am, I check my phone during down moments.

That's how I heard about bombs going off in Boston.

When one is simultaneously watching his 5-year-old son and wanting to find out more about what's happening in the outside world, there's only so much that one can do. First rule: don't switch the TV over to some news channel that is assuredly replaying video of the blast and its aftermath while interviewing eyewitnesses. No, best to leave it on Rise of the Guardians. Even though our world seems to insist on introducing tragedy to our children at a younger and younger age these days, I wasn't about to do that.

And so I kept Twitter up and running in order to get my news that way. A picture began to form of fatality and chaos that I didn't need CNN's talking heads to supply me with. And like many others I was horrified, and I prayed, and I sent out my own two-bit tweets in response expressing grief and condolence. Like many others, helplessly watching from their living rooms miles away, I didn't know what else to do.

Being a pastor when things like this happen always brings with it a question whether to acknowledge it somehow. It was an easy thing to post something on the church Facebook page; to call people to prayer in the midst of violence and loss. But beyond that, there's always the question as to what might be the best response. Might people have it weighing on their minds come Sunday morning, necessitating a response in worship? If so, what might that response be? A special litany, a mention during the prayer time, a mention during the sermon? What might be the best way to provide corporate pastoral care?

Understand that this question isn't asked lightly or out of rote obligation. There is a sense of requirement involved, but it doesn't come from a place of apathy or annoyance. It's simply a natural question to ask if pastors are properly aware of their surroundings and actively discerning what their people may need in the face of such events.

This Easter season, I've been straying from the lectionary to present some of the things that Jesus says after the resurrection. It's my own spin on the old "seven sayings from the cross" sermon series that many preachers have done. This Sunday the focus is Jesus saying "Feed my sheep" in John 21. As I sat down to begin thinking about this text, my thoughts inevitably turned to one of my favorite bands, Five Iron Frenzy, and their song "Far Far Away" which is based on this text:

I've listened to this song more than once this week, not just to inspire sermon prep but because it seems to be my own way of dealing with Monday's events: a time when hope seems to evade one's reach, when we wish that voices singing off in the distance were closer to speak more clearly to us.

By this point, most people might be sick of Easter if anyone is even still aware that we're only about halfway through the season. But our need to hear those voices singing isn't satisfied one day a year; it's a constant need. Where is truth and hope in the midst of tragedy? Where is resurrection when all we seem to have around us are crosses?

I don't have much to say in the face of yet another horrendous event. I didn't have much to say in the face of the last one. I do know that it's still Easter and that it's always meant to be Easter. I do know that people rushed to help that day and have rushed to help since. I know that these are hopeful things in the midst of despairing times, and that they help witness to a promise that one day soon a song shall rise, if we only keep striving to hear it.
By Jeff Nelson
Email ThisBlogThis!Share to TwitterShare to FacebookShare to Pinterest
Labels: Bible, Ministry, Quotidian
Newer Post Older Post Home