Small Sips Is Trying Not to Have a Spittle-Flecked Nutty

The end of the reform of the reform? Or a new reform of the previous reform? On Maundy Thursday, Pope Francis visited a prison to wash the feet of some inmates, as has been a custom. But some are unhappy because this year the practice included girls. And a Muslim. A Muslim girl, even. THE HORROR:


Francis' decision to disregard church law and wash the feet of two girls — a Serbian Muslim and an Italian Catholic — during a Holy Thursday ritual has become something of the final straw, evidence that Francis has little or no interest in one of the key priorities of Benedict's papacy: reviving the pre-Vatican II traditions of the Catholic Church.

One of the most-read traditionalist blogs, "Rorate Caeli," reacted to the foot-washing ceremony by declaring the death of Benedict's eight-year project to correct what he considered the botched interpretations of the Second Vatican Council's modernizing reforms.

"The official end of the reform of the reform — by example," ''Rorate Caeli" lamented in its report on Francis' Holy Thursday ritual.

Let me suggest something to those angry that Francis is paying more attention to acts of service and less to the pomp and regality of his office. Two things, actually. First: which, truly, do you think Jesus would prefer? Take your time in answering.

Next, since the Catholic Church is as caught up in trying to seem relevant to outsiders and to disenfranchised church people as anyone else, which do you think will resonate more with them? Again, take your time.

I have a colleague who once got in trouble with some church members because some pizza sauce got on the parlor carpet during a youth function. Never mind the ministry that was happening for the kids who were there, because there was pizza sauce on our nice carpet. To me, the hissy fit that people are throwing about some of the stuff Francis is doing is a "pizza sauce on the carpet" argument happening on a global scale.

Also, just for fun. From that same article:


"Before liberals and traditionalists both have a spittle-flecked nutty, each for their own reasons, try to figure out what he is trying to do," Zuhlsdorf wrote in a conciliatory piece.

All in. Gordon Atkinson has a great post about how our reasoning sometimes conflicts with our spiritual experience:


But here is a crazy thing. The more I’m convinced that there is no loving Creator watching over us, the more likely I am to receive an emotional epiphany during worship. I will be sitting in church somewhere – often a powerless and humble church without much money or influence – and some little thing will shatter my heart. Often it will be a small piece of liturgy or an ancient symbol that points to one of the crazy, backwards, upside-down gospel truths that Jesus was famous for proclaiming. The call for us to become like children, the thought that the least important person might be the greatest, or the impossible idea that we should love our enemies.

Suddenly I will be filled with a crazy joy that drives out any other thought or feeling. I shiver and tears come to my eyes, though I often don’t know why I am crying. Something tickles my reptilian brain and it becomes absolutely convinced that there is more going on in the Cosmos than we can see or know with our meager five senses. And in that moment, every small thing I perceive seems aflame with God.

I've had moments like that. Moments where I feel like I'm near the end of my rope; I'm exhausted, I don't get why people do what they do, I'm weary of church or spirituality or theology, and then...boom. Something happens. Something I can't explain. Something where I'm moved by the same sort of small happening that speaks in a big way to my spirit. And it's all good.

Love because we first were loved. Greg at The Parish has his own reflections on same-sex marriage, and identifies a deeper issue behind the debate:


Christianity has failed to make Christians holy, and it has clearly failed to make them empathetic. This should be a catastrophic failure of what they believe, but they have insulated themselves against reality shattering their theologies by insisting that God makes them holy by virtue of killing Jesus. No work is necessary. No attempt to understand a suffering world. No reason to reach out to "the other" with compassion. No actual laboring for a genuinely holy life. No. Only a triumphalist assertion of holiness that the recipient of grace has done nothing to earn. Indeed, this dependence is seen as a virtue. This redefinition of holiness is disastrous for those who are viewed as enemies of the tribe.

There is more to following Jesus than believing particular things about his death. My guess is that Greg might argue that Jesus is meant to serve as our moral example as Christians, which I agree with. But I also take more of a Reformed bent in saying that we are not just inspired by Jesus' example, but also by his love. We are meant to be moved by his life, death, resurrection to change, to respond, to do. Rather than hold to a certain belief and then proclaim that all those who don't believe the same are "out," we are meant to be inspired to acts of love and service and viewing all as beloved children of God.

You know, like washing the feet of a Muslim girl in prison.

It bears repeating. Michigan is in the Final Four. 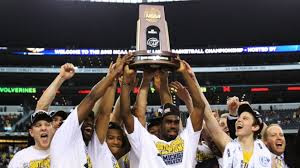 I'm sure that's causing some to have a spittle-flecked nutty. Go Blue!

Misc. Jan on "Me Theology." Some of my favorite blog entries from Brant Hansen are his "If Jesus Had a Blog" entries. This one is no exception. Jamie with some frank talk about sex.
By Jeff Nelson
Email ThisBlogThis!Share to TwitterShare to FacebookShare to Pinterest
Labels: Church, Small Sips, Sports, Theology
Newer Post Older Post Home