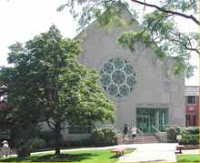 This past Saturday, I attended a workshop at John Carroll University as part of the Ignatian Spirituality Institute. It's a bit hard to believe, but I only have one more class and then I will have completed the first year of the program. The second year is less focused on classwork and more on supervised implementation, so this workshop was much more focused on practical matters such as attentive listening.

When we broke for lunch, I decided that it was such a beautiful day that I was going to wander around the campus a little. There were students lounging on the immense greenspace between buildings, enjoying the day, some even studying for finals. I wasn't looking for it, but when I noticed the St. Francis Chapel as I walked, I knew that I was going to stop in.

I don't know what I was expecting, but I didn't expect what I saw in several ways. First, the chapel space is much more modern than I thought it would be. I guess that I was expecting soaring trusses and lots of mahogany; instead I found that it's a much simpler space than that, with slate flooring and modern abstract windows. There is also an alcove partitioned off with a marble wall at the rear.

As I stepped into the space, looking around, I glanced into the alcove to discover a student praying the rosary. Wanting to be careful not to disturb her, I sat across the aisle as silently as I could, content to just look around at the space. There were three more people sitting at the front, a teenage girl and two older men perhaps on a campus visit. They left pretty early into my own visit, and then two more students wandered down the aisle, genuflecting before entering their row to sit down. And for a time, there the four of us were: quiet, prayerful, mindful of one another without dwelling on it.

It was quite an understated experience, and yet a powerful one that caused a lot of reflection in me. John Carroll is a Catholic university with obvious strong ongoing ties to that tradition. One of my first thoughts was to rack my brain regarding my own undergrad experience at an institution affiliated with the United Church of Christ to recall whether any classmates had ever felt the need or inspiration to wander in and sit in either of the chapels on campus. The short answer: no, not that I know of.

This led to all sorts of other reflection on a number of issues regarding UCC identity and practice, which I plan to explore over a series of posts. I figure I'll do 2-3 of them depending on how I structure it, but these are the topics I'll cover:
And maybe some other stuff thrown in. But these were the main items I started thinking about after sitting in that chapel, marveling at the seemingly ongoing dedication to another tradition among a population that mainliners, among so many others, lament that they are losing.

So that's what I'll deal with in the next week or two. Stay tuned.
By Jeff Nelson
Email ThisBlogThis!Share to TwitterShare to FacebookShare to Pinterest
Labels: Blogging, Spiritual Direction, Spirituality, United Church of Christ
Newer Post Older Post Home