Small Sips Is Not Made In Ohio

Oh, that Bono. Jamie the Very Worst Missionary has been writing some posts critiquing mission work. She's received some pushback and has even been told a few times that she doesn't know what she's talking about even though she was a missionary in Costa Rica for five years. At any rate, her latest offering is on the sexiness of missions:


In 2006, U2 frontman, Bono, (literally wearing rose-colored glasses) called the Church to action in Africa during an interview for the Willow Creek Leadership Summit. I was there. It was kinda awesome. It was a bold and honest interview and it created a fervor for justice and aid for Africa's poor and marginalized nations. It lit a fire. And that fire launched Africa Missions to the top of the missionary food chain.

Africa became a rockstar. Everybody wanted in.

Six months later, El Chupacabra and I found ourselves sitting across the table from a pastor as he explained that he wouldn't support our effort to get to Costa Rica because, “You guys are great. You're good communicators, you've got vision, and I really believe in what you're doing... but... I just can't sell Costa Rica... Are you sure you're not called to Africa? Our people want Africa.”

As we left, reality sunk in; Our mission wasn't sexy enough.

During the month of April, the church I serve studied one of our UCC missionary partners in Colombia, Michael Joseph, which was quite interesting (he's in the pic above). We learned, of course, about his work, which included working with victims of violence in that country. We heard about the importance of mosquito nets, and the incredibly long trips that he has to make some days to get to where he's needed. It sounded difficult, and I think it was inspiring to those who gathered to listen. Colombia isn't Africa, but I think we came away with a better idea of what things are like for that country and the importance of missions there.

I suppose that if Bono had talked about Colombia that day, more people would pay attention and want to go there or send support there. Celebrity endorsement sure can do a lot for good causes. But there are many more that fly under the radar, considered not as sexy because a rock star wants to support something else.

I dunno. Colombia sounds like a place that needs help to me.

Where? Not there. Where are footballs used in Michigan's games made? Not sure, but I can narrow it down a little: 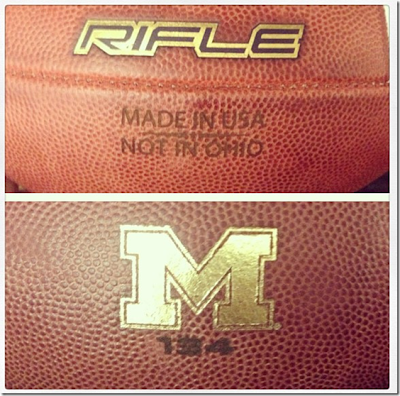 We've had this argument before. Earlier this week after the tornado in Oklahoma, John Piper tweeted a verse from Job about a wind striking Job's house, killing his family. To his credit (or something), the chosen verse is ambiguous enough that it could just be a reference to what happened devoid of theological postulation.

On the other hand, Piper has done this often enough after major tragedies that we could probably take a good guess at what's behind it. Rachel Held Evans goes ahead and takes a crack at it:


Because this is what John Piper does whenever there is a tornado…or earthquake…or shooting…or war. While the world is still in shock, while we struggle to find the words to convey our grief and compassion and to weep with those who weep, he jumps in with an explanation, and it’s always the same: Bad things happen because God is angry. This is God’ judgment on undeserving, sinful people. Repent. We brought this on ourselves.

That’s because Piper and many in the fundamentalist neo-Reformed movement are working off of a perversion of the doctrine of total depravity that not only teaches that human beings are depraved—that is, that our humanity is marred by sin—but that this depravity renders the world’s men, women, and children into valueless objects of god’s wrath, worthy of nothing more than eternal torture, pain, violence, and abuse. Therefore, natural disasters (such as the recent tornado outbreak, the Asian tsunami of 2004, the Japanese earthquake, sickness, cancer, accidents) as well as evil perpetuated by others (the Sandy Hook shootings, the Boston bombings, the Holocaust, 9-11) are merely expressions of this god’s unending, unquenchable, and unpredictable wrath upon humankind. Sin triggers in god a sudden outburst, a violent temper tantrum, and humanity is exposed to a brief glimpse of what this god really thinks of us, what we all really “deserve.”

Now again, Piper's tweet wasn't definitive. And to his credit (again, or something), he deleted the tweet at some later point, so he recognized that there was something inappropriate about it...or he got enough pushback from people that he didn't want to deal with it.

This type of theology that always pops up after tragedy, this idea that God is doing this to punish people or call us to repentance, is crappy pastoral care ("I'm sorry your loved one was violently killed in this tornado, but it really was your own fault...what'd you do to deserve it?") and crappy theology ("Nobody expects the Big Angry God! Where will He strike next? Repent, because the next time IT COULD BE YOU!")

For fun, here's a link to my response to one of the last times Piper offered up such an explanation after a disaster. Oh, and here's another one.

A serious subject, with cartoons. Hyperbole and a Half has returned with a blog post about struggling with depression. Here's a brief excerpt, offered without comment, and my strong encouragement for you to go read the whole thing:


And that's the most frustrating thing about depression. It isn't always something you can fight back against with hope. It isn't even something — it's nothing. And you can't combat nothing. You can't fill it up. You can't cover it. It's just there, pulling the meaning out of everything. That being the case, all the hopeful, proactive solutions start to sound completely insane in contrast to the scope of the problem.It would be like having a bunch of dead fish, but no one around you will acknowledge that the fish are dead. Instead, they offer to help you look for the fish or try to help you figure out why they disappeared.

Misc. Jan on whether sermons are passe. I say no. Nadia Bolz-Weber's "State of the House" address at her church's annual meeting. Sojourning Spirituality on resigning from congregational ministry. Sounds familiar. The Parish on sitting through fifteen (!) valedictorian addresses during a baccalaureate.
By Jeff Nelson
Email ThisBlogThis!Share to TwitterShare to FacebookShare to Pinterest
Labels: Ministry, Small Sips, Sports, Theology
Newer Post Older Post Home