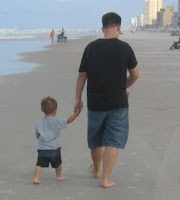 The other day, a well-known author on church issues posted this on their Facebook page:

The "likes" and snarky comments about the day followed from there, as this little history lesson seemed to be meant and received as a commentary on the noble origins of Mother's Day contrasted with the not-so-noble origins of its "complement." There were jokes about ties and suits, and at least one swipe at men who might feel oppressed by Father's Day not being as big a celebration.

I spoke my peace and then decided to recuse myself from responding further, as internet arguments, especially on Facebook, are stupid. But I still decided to write a blog post about it, because I can't help myself.

So first, obviously, a holiday's origins determine its eternal worth. I mean, just ask all the people who say "you know it started as a pagan day, right?" every Christmas and Easter. Surely there can't be any deeper truth to these days that we can find if we move beyond the superficial aspects of the day, and surely holidays are incapable of evolving. How they started is how they should always be recognized!

The faulty logic in that is hopefully apparent right off the bat, as shown in the above equally snarky comment. But beyond that, let's examine the origins of Father's Day a little more closely:


Father's Day was founded in Spokane, Washington at the YMCA in 1910 by Sonora Smart Dodd, who was born in Arkansas. Its first celebration was in the Spokane YMCA on June 19, 1910. Her father, the Civil War veteran William Jackson Smart, was a single parent who raised his six children there. After hearing a sermon about Jarvis' Mother's Day in 1909, she told her pastor that fathers should have a similar holiday honoring them. Although she initially suggested June 5, her father's birthday, the pastors did not have enough time to prepare their sermons, and the celebration was deferred to the third Sunday of June.

It did not have much success initially. In the 1920s, Dodd stopped promoting the celebration because she was studying in the Art Institute of Chicago, and it faded into relative obscurity, even in Spokane. In the 1930s Dodd returned to Spokane and started promoting the celebration again, raising awareness at a national level. She had the help of those trade groups that would benefit most from the holiday, for example the manufacturers of ties, tobacco pipes, and any traditional present to fathers. Since 1938 she had the help of the Father's Day Council, founded by the New York Associated Men's Wear Retailers to consolidate and systematize the commercial promotion. Americans resisted the holiday during a few decades, perceiving it as just an attempt by merchants to replicate the commercial success of Mother's Day, and newspapers frequently featured cynical and sarcastic attacks and jokes. But the trade groups did not give up: they kept promoting it and even incorporated the jokes into their adverts, and they eventually succeeded. By the mid 1980s the Father's Council wrote that "(...) [Father's Day] has become a 'Second Christmas' for all the men's gift-oriented industries."

So yeah, commercialism has played a big role in Father's Day over the years...just like every other holiday ever. But before that, Sonora Dodd earnestly wanted to celebrate fatherhood, inspired by her own father raising six children by himself. It's no peace demonstration or anything, but it sounds like an okay reason to me.

Finally, Father's Day is the celebration of a role. As it turns out, yes, this role tends to be one that males occupy. I'm not the type to scream "reverse discrimination" because I know better, but why can't we just let fathers--who, yes, again, happen to be male--enjoy a day meant for them without belitting it while issuing a pre-emptive "You can't complain about what we're pointing out because men have historically oppressed others?"

But really, this comes down to personal emotion. I'm proud to be a father. It's one of the big things that, at the end of my life, I hope to look back on and say that I got right. I don't ask for much on the third Sunday of June. First off, I'm a pastor, so there's only so much that can be done to celebrate a Sunday holiday in my household. I'm cool with just a day without many other interruptions with my family. And so to see someone suggest that Father's Day is silly because 1) It wasn't as popular when it started, 2) It wasn't started with intentions as wonderful as Mother's Day, 3) You're a man, so suck it up, gets under my skin because I take my role seriously and appreciate that there's a day set aside to recognize the importance of this role in a child's life.

Maybe I'm taking a Facebook status way too personally. That could be it, too.

But I plan on enjoying my weekend, particularly Sunday, even if some apparently think doing so is silly.
By Jeff Nelson
Email ThisBlogThis!Share to TwitterShare to FacebookShare to Pinterest
Labels: Fatherhood
Newer Post Older Post Home