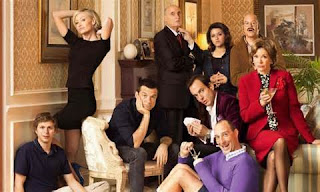 "Now the story of a wealthy family whose future was abruptly cancelled, and the one son who had no choice but to keep himself together."

I sometimes wonder what would happen if Joss Whedon would ever be given the opportunity to write new episodes of Firefly for TV. Part of me, of course, would be absolutely thrilled: a clever, criminally under-appreciated, creative space western with snappy dialogue and incredible adventures? Who wouldn't want that to finally return and experience redemption after years of fans pining for such a thing? On the one hand, people would finally have a long-harbored craving satisfied; a resolution to a show ended too soon.

But part of me would also have hesitations about such news. First off, the actors are older and many have understandably moved on to other things. Would they feel the same passion and dedication for the project? On top of that, two of the main characters are now dead thanks to the movie Serenity, which really was meant to be the resolution for grieving fans. And what stories would they tell? The aforementioned movie crammed a good 3-4 seasons worth of material into those two hours; what's left? For all of those reasons and more, I'd seriously wonder whether I should just be more happy with what we have, rather than hope for something that could very well just not be as good.

I admit that part of me had the same hesitation when I first heard that they'd finally been given the all-clear to produce a new season (and possibly a movie) of Arrested Development, another criminally under-appreciated show that was cancelled far too soon. They'd have the entire cast back, albeit a few years older, but how would they write the show after so many years being away from the material? Would it feature the same catchphrases, the same self-referential humor, the same deadpan and sharp delivery by the actors, or would it be a shadow of its former brilliance; a chance to make something just because there was the opportunity to make it?

Coffeewife and I watched probably the first 4-5 episodes the day it appeared on Netflix, and finished the season a little at a time the rest of that week. And I am happy to share that the show hasn't lost a step. Like, at all.

The actors seem to be into the material as much as they ever were. The only two who even look any older are Michael Cera and Alia Shawkat, but that's to be expected from child actors, and the writing compensates for it in appropriate and humorous ways. The stories are just as interconnected and self-referential as they ever were and include many of the side characters from the original series as well. And some of the running gags from the previous incarnation are incorporated while avoiding merely filling an expectation that they be there.

In other words, these new episodes are just as good, just as clever, just as sharp as the original.

After the last episode, I simply looked at Coffeewife and said, "I want more." But thankfully, it wasn't said out of a desire that something had been cut short. Instead, it was simply out of appreciation that the creative energy that had fueled the show before was still very much there; still had more stories to tell without feeling tired. The latest news is that a movie is being planned. Unlike Serenity, it feels less like a thank-you to the truest of fans and more of a true completion of something that was finally given an opportunity to end on its own terms.
By Jeff Nelson
Email ThisBlogThis!Share to TwitterShare to FacebookShare to Pinterest
Labels: Pop Culture Commentary
Newer Post Older Post Home