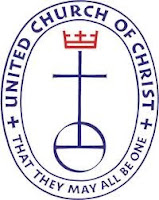 During General Synod, Twitter provided not only helpful running commentary on the event. It also provided many ways to poke fun at some of the proceedings. One hashtag that emerged was #fakeuccnews, where people could contribute false headlines about the United Church of Christ in the spirit of satire. I couldn't resist contributing, and I felt like listing mine here, along with a few more that I thought of:

-Fire breaks out on stage, Synod votes to study the issue further before deciding whether to evacuate.

-Leak from Local Arrangements Committee reveals Synod cookies are all made of tofu.

-"Unitarians Considering Christ" joke made, last person who has never heard it laughs.

-Brian Adams to perform at next Synod as part of upcoming Mission: Summer of '69 initiative.

-UCC communications department issues press release about next Synod in Cleveland that includes a declaration that "we will not, no never, ever ever EVER NEVER EVER consider organizing a trip to an Indians game as part of this event."

-Collegium issues apology to Optimus Prime about energon cubes used as part of most recent General Synod stage set. [You had to see it to find this one funny]

-Delegates frequently complain about voting clickers, citing lack of access to Candy Crush on them.

-Delegates at next Synod to sit in deck chairs rather than at tables, will be frequently asked to rearrange them.

I kid, I kid. See you in Cleveland in a couple years.
By Jeff Nelson
Email ThisBlogThis!Share to TwitterShare to FacebookShare to Pinterest
Labels: Funny If It Wasn't So Sad, Posts That Prove How Sick I Am, United Church of Christ
Newer Post Older Post Home