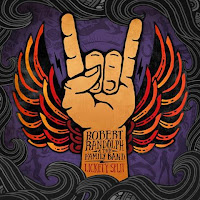 Okay. So, for some reason I keep coming back around to wanting to do these things. They started as weekly, then I went to bi-weekly, and now I'm going to try monthly. So here are five pop culture items that I've been enjoying lately.

1. Robert Randolph and the Family Band, Lickety Split - I heard about this album shortly before it came out. Turns out there are quite a few albums by artists I like coming out this year. Shows me for not paying attention. Anyway, this new batch of tunes is just as uplifting and positive as what he's put out in the past. "Born Again" and "Take the Party" (featuring Trombone Shorty) are favorites.

2. Warm Bodies - Coffeewife and I watched this the other week. I wasn't sure whether I'd like it considering how much they mess with zombie mythology. Essentially, the main character, a zombie named R, tells the story of his "life" from his perspective, which includes his falling in love with a live woman named Julia (did you catch that?) and as a result starts to come alive again. I'll give it props for tweaking the genre, and it was an interesting story for what it was.

3. The trailer for season 4 of The Walking Dead looks awesome. Is it October yet?

4. Christmas in All Seasons by Geneva Butz - When I was in high school, I went on several mission trips to Old First Reformed Church in Philadelphia. They have quite an extensive ministry to the homeless, and I remember those trips and that city as among my favorites of that nature. Back when Rev. Butz was the pastor there, she wrote this book based on her experiences. Even though we're in the heart of summer, this is the time when I start to think about Advent and Christmas, and so it was timely that I remembered that this book was on my shelf. As the title implies, however, this is not just a Christmas book, but a book with stories based on the entire church year.

5. Did you know that Dave Matthews Band has an incredibly extensive list of songs that they've never recorded or released on a studio album? I'm not exaggerating when I say that if they went into the studio to record all of them, they'd have 3-4 albums' worth of material. Most of them just find their way into set lists while they're on tour, and a few of them have been released on limited edition bonus discs or on iTunes as one-shot deals. I have a few of the rare studio songs, but not many, so I decided to start tracking down recordings of the ones I don't have, and lucked into quite a few of them through a few Google searches. My favorites so far are "JTR" and "Sweet Up and Down" from the so-called "Lillywhite Sessions" (most of which would be released as Busted Stuff), "Trouble With You," and this song, "The Idea of You:"