On Not Being at General Synod 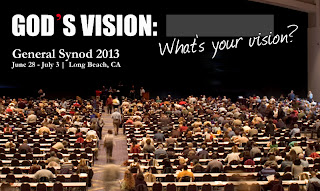 The 29th General Synod of the United Church of Christ is underway out in Long Beach, California. I'm sitting here on my couch drinking coffee.

It's not out of protest for such a gathering, or because I don't want to be there. I actually do. I was excited when they first announced that the next one would be in Long Beach, as I've never been to California (note: I still haven't). And I feel like I'm leaving my fellow members of the 2030 Clergy Network's National Planning Team down by not pulling my weight out there. Not a good start for the new co-moderator.

No, it really just comes down to a combination of poor planning and uncertainty around the selling of our former house and the purchase of our new one. I haven't written about that on here, but it was a bit of a hassle and the process just kept dragging out longer and longer and dropping the needed money into a trip out West didn't seem like a prudent thing at the time.

So here I sit, able to follow the action on Twitter, which is actually a lot of fun. It's no substitute for actually being there, but it helps me keep up with some of the proceedings.

On the whole, I've always had a mixed opinion about General Synod. On the one hand, I've loved meeting up with friends and colleagues from across the denomination, the worship and preaching is mostly good, the workshops and display hall are great places to learn and explore, and the sponsored luncheons are great opportunities to hear more about what a particular group is about.

Then there are some of the other things. There are times when I've wondered about how worthwhile a gathering like this is in a general sense. I'm big on supporting the local church, and I've sometimes wondered about how relevant these gatherings are to how churches may serve in local mission. At other times, I've grown weary of the ways people jump to righteous indignation during plenary whether it's truly warranted or not. Sometimes these gatherings can be more spiritually and fiscally draining than helpful or uplifting. Those aspects are worth acknowledging, too, whether we'd prefer to or not.

In two years, Synod will be in Cleveland. I've already vowed that I'll be attending considering that I live about an hour south. I keep in mind that I'd vowed to attend this current Synod as well, but the next one will be different. I anticipate that it will be the same mixed bag of experiences that it always is, and that I'll continue wrestling with those aspects of it that make me wonder about the effectiveness of such a gathering.

But I'll be so close. And I'll still have responsibilities on the National Planning Team. And, if I'm honest, I like attending more than I don't. I guess it comes down to that.