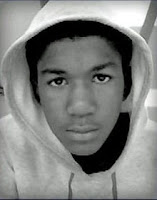 The tragedy that we have become. Fellow UCC pastor Jennifer Mills-Knudson has some very well-put thoughts on the recent verdict in the George Zimmerman trial...or more accurately the culture that led to the incident between Zimmerman and Trayvon Martin and everything that has happened since:

Tonight, George Zimmerman is a free man. The basic story is not in dispute: Zimmerman saw Trayvon Martin walking in the neighborhood, and decided that a young black man in a hoodie posed a threat to his safety. He openly admitted to following Martin in a van, calling 911, and hearing the 911 operator tell him to back off and not get out of his vehicle. Yet he did get out, a scuffle ensued, and then Zimmerman shot Martin, an unarmed 17-year-old boy, because he was afraid of him. The jury concluded that this was not a crime, and Zimmerman is not guilty.

In other words, it’s legal to shoot an unarmed black teenager if you are afraid of him.

And that's just her getting warmed up. From there she analyzes four cultural factors at play in this: guns, race, heroes, and justice. The whole thing is very good, and I highly recommend it.

For me, the idea so succinctly stated in the standalone sentence in the above quote is what I have been mulling over since I first learned of the verdict this past Saturday night. Zimmerman got out of his car after being told not to, confronted Martin because he deemed him suspicious due to his skin color and his hoodie, and got into a physical altercation that ended with him shooting Martin. And Zimmerman has been cleared of any wrongdoing in this series of events.

It's been interesting to me to hear the narrative pieced together and perpetuated in certain corners: that Martin allegedly had a history of drug use and was a thug; that his history and character, however skewed, was somehow relevant to the night he was walking home from the convenience store and confronted by Zimmerman. It's been made less about why Zimmerman felt the need to do what he did and more about why people don't want to feel bad about it. And it's just as problematic, feeding into and fed by our society's attitudes about some of the things that Rev. Mills-Knudson talks about in her piece.

On another down note. PeaceBang recently wrote a post about depression and the ministry in response to a question on Facebook:


Ministry settings are our partners in faith formation, health, and happiness. It is not just the minister’s job to find well-being, happiness and “self-care” entirely on their own in the vain hope that they can achieve those things within toxic work environments. Not even Jesus was that much of a miracle worker.

When I was called to a congregation that offered a positive, healthy working environment, generous compensation and time off, supportive lay leadership, talented and fun staff, and the ordinary, usual, expected challenges of parish ministry, guess what? I began to achieve lasting wellness! I don’t even consider myself to be a melancholic any more. I don’t sweat my regularly scheduled summertime bout of the blues, as it comes and goes so gently nowadays that it leaves no scars. For me, dream work, silence, reading, prayer and meditation were the drugs I needed to overcome depression. Anxiety attacks stopped when I ended relationships with dishonest and abusive people. Panic attacks ceased when I learned to spend time attending to my –what to call it — psychic gifts. That sounds ridiculous, like you should start calling me Miss Cleo. Let’s call it mystical intuition? Spidey sense? Whatever you call it, when I learned to attend to and ACT ON my Spidey sense, my mental health got …healthy!

She touches on many important aspects of clergy self-care such as partnering with one's ministry setting (and making sure there is sufficient support for such partnering to begin with), self-awareness, and seeking proper treatment when one needs it.

In addition, after some feedback from readers, she offers an addendum to a paragraph that many found unclear regarding people with depression entering seminary, which needs to be read along with the original.

Chicken soup. Or humble pie. Or something else. Brant articulates something that I've long had a beef with. And also hits close to home in a way:


I read "look what our church is doing" accounts in newsletters, but don't hear the invariably messy follow-ups. We get the "victory" stories over sin and depravity, but no one publishes books called, Wups, I'm Totally Messed Again. Yet, that's where the stories of my actual life are. We don't like our stories open-ended. So we clean up our stories, and act like they're finished.

I used to be a youth minister, and the conventions would feature one impressive guy after another, with remarkable stories about what happened in their youth groups. It was really amazing! Why was my youth group kind of a mess? Why wasn't I inspiring anyone like that? It was impressive!...until I realized I could pick and choose stories, make believe they were final, and, presto -- I'm awesome.

And that inspiring day when Big Joe the Football Lineman cried and prayed? Well, that was the end of the story! But in reality, it wasn't.

A while back I posted some thoughts on a book championing the New Awesome Way To Organize Church, and talked about skipping the "success stories" at the back. At that point I'd been in ministry long enough to be jaded by the promise that if you just do what this book says, you can have the same results. A commenter took issue with that, saying something about how awful it was that I didn't want to read about other churches' success. I countered with the question of why books like that don't include "failure stories." I don't think he ever answered.

Anyway, that's the first point. "Success stories" tend to be about a certain block of time and edit out the messier, less success-y details. The other thing they do is leave out whatever happened or has been happening afterwards. Did the church eventually fold? Did the addict relapse? Did the marriage fall apart? We don't know because it doesn't fit the narrative and, more importantly, stuff like this doesn't neatly resolve so much as continue to happen, however imperfectly.

The nine years I've been in full-time ministry are littered with cliffhangers, false starts, miscues, bad decisions, and unresolved stories. That's just how it is. And it's because I've experienced these things so much that I'll always suspect ministry books that include "success stories."

Misc. Jan on the role of race in the Zimmerman/Martin incident. Greg on the same. Luke on judging other parents. Rachel Held Evans on the selective use of "clobber verses."
By Jeff Nelson
Email ThisBlogThis!Share to TwitterShare to FacebookShare to Pinterest
Labels: Church, Justice Issues, Ministry, Politics, Small Sips
Newer Post Older Post Home