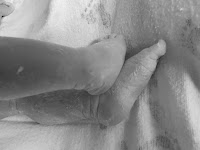 It wasn't very long after we found out that our second child would be a girl that Coffeewife started scouring clothing racks for whatever deals that she could find. I wasn't against this, really, as we had planned ahead with Coffeeson pretty well, and now especially that in some ways we'd need to start over, it made sense to do so again.

Coffeewife began showing me what she bought, and I wondered what all this pink frilly stuff was. There are, like, skirts and bows and lace and things laying around here. I mean, I know they serve some kind of purpose, but what? It is a great mystery to me. Perhaps it is for this baby to wear? I mean, that's why she bought them, right? I only had a brother growing up and heretofore have only been raising a son, but that has to be it, I think. So I guess I'll dress her up in them. What else am I going to do with them, right?

True enough, this is new territory. I've written about that already. But as of late Sunday night, that territory became a little more concrete. After a long day that started with phone calls to key church people letting them know what was up, I drove Coffeewife to the hospital where we would wait. And wait. And wait. The dilation and effacing came slowly. We found Oceans Eleven on the hospital's limited channel selection. We walked around the unit, Coffeewife refusing to lie in bed for too long until she absolutely had to. We watched Simpsons episodes (When did Flanders marry Mrs. Crabapple? It's been a while.).

And finally, the epidural was needed. She was ready. And at that point it didn't take long for Coffeedaughter to make her appearance.

So far, she seems to be night and day from Coffeeson. She sleeps in her bassinet on her own without needing to be held. She strongly disapproves of being cold and loves being swaddled and feeling warm and secure. She seems pretty easygoing about most things, save for those basic needs like hunger or needing a diaper change. Otherwise, she seems quite content to keep to herself. As time goes on, more of her personality will emerge, but in some ways she's perhaps already shown that she'll be more mellow and reserved than her brother. Time will tell how accurate this really is.

Now begins a new time of discovery: of who Coffeedaughter will be, of what it will be like to raise two children instead of just one, of what it will be like to raise a daughter as well as a son. It will be pleasure to discover these things, to continue growing as a father and as a man; to further discover who I am at the same time.
By Jeff Nelson
Email ThisBlogThis!Share to TwitterShare to FacebookShare to Pinterest
Labels: Fatherhood, Quotidian
Newer Post Older Post Home