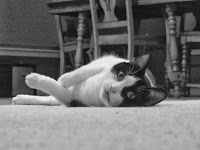 As soon as we walked into the kennel, she started putting on a show. She rolled onto her back, her head upside-down and almost pressed against her cage, while she stretched a paw toward us through the bars. All of this while a constant stream of meows burst forth, as if she couldn't get them out quickly enough to tell us everything that she wanted to say.

There really was no debate that day about who would come keep us company at our new apartment in West St. Louis County. We'd just moved off of Eden's campus and in short order wanted to take advantage of our newfound freedom to have a non-human companion help to transform our new space into a home. And she did, perhaps a little too enthusiastically, as she'd wake us frequently in the dead of night with a series of sandpapery kisses. No matter how many times she'd be gently removed, she'd be right back again. In hindsight, we were her new family and maybe she was just joyful to have one.

We named her Eve. It's common to think that since I'm a pastor, this was a reference to the Biblical character. Actually, the allusion is a little more obscure and clever than that: since she was black and white, it was suggested by the psychology major that we name her after the first documented case of Dissociative Personality Disorder whose personas were known as Eve White and Eve Black. Maybe that explanation is more interesting or more disappointing. But we liked it.

Of the three cats we eventually acquired, Eve was always the most affectionate. Those uninvited middle-of-the-night wake-up calls never stopped, although they did become less frequent as she learned to be satisfied with lying between legs or up against someone's back. More notable, perhaps, was the way she'd seize the opportunity to take up residence on your lap shortly after you sat down. All the subtle hints given that you wished to get up would only be met with wide-eyed stares, the rest of her body only slightly adjusting so that she could remain.

This was one of her greatest gifts, the way she'd get you to slow down for a while and just enjoy the warmth of her company. This is a common behavior with cats to be sure, but neither of the other two do it like she did. She had a better way of sensing when she was needed; of sharing herself when we were most harried or upset.

There's a Calvin and Hobbes strip where the two title characters are getting ready for bed while expressing disappointment that the day's play couldn't have lasted longer. But then one suggests to the other that they can keep playing in their dreams together, so they make plans to do so. Maybe I, too, can hold out for such a hope that rough-tongued kisses and warm laps may still happen where dreams dwell, the gifts of a special friend still enjoyed.
By Jeff Nelson
Email ThisBlogThis!Share to TwitterShare to FacebookShare to Pinterest
Labels: For No Particular Reason
Newer Post Older Post Home