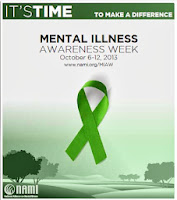 A special week. October always brings with it several commemorations of justice issues that I like to highlight. First, next week is Mental Illness Awareness Week:


In 1990, the U.S. Congress established the first full week of October as Mental Illness Awareness Week (MIAW) in recognition of NAMI's efforts to raise mental illness awareness. Since then, mental health advocates across the country have joined with others in their communities to sponsor activities, large or small, for public education about mental illness.

Those particular days mentioned in the second paragraph are more recent developments as part of this week. There are plenty of resources at the NAMI site for each. Mental illness remains an incredibly stigmatized and underfunded issue in the United States.

But don't just take the word of the precocious yungin in the video. Click the link and find out more about all the good stuff that purchasing fair trade products can do.

So, get a life, basically. Jan at A Church for Starving Artists notes the importance of pastors having friends outside the church:


Maybe you were loved deeply. Maybe your personal identity and life’s purpose were based - mostly – on your role as The Pastor. Maybe your biological clock is based on the liturgical calendar. Maybe you were blessed with enough years to retire from your church, honored and adored. But now you are retired.

Maybe you have lost your reason to get up in the morning.

That's the setup for why such things are important, and honestly it's a little frightening to me. If as a pastor your entire world is the church, what will your world be after retirement? I know that such things are a long way off for me, but Jan goes on to encourage pastors my age to set the groundwork now. Even aside from retirement issues, it's good for pastors to have such hobbies and friends aside from church. If we could only find the time...

I thought this before it was cool. Ridley Melbourne has a blog post entitled "The Rise and Fall of Hipster Churches:"


Nevertheless, I am concerned that some of these churches may have already sown the seeds of their own destruction.

Seed 1: Consumerism. The first seed derives from the strong appeal to the highly refined tastes of a group of consummate consumers. Instead of challenging these consumer instincts these churches appeal to them. Make no mistake; this is a demanding group not known for loyalty. The vast majority of members were in another church previously and a proportion moved because they were disaffected. Hipster churches have set high expectations that will demand constant creativity. Staying on the cutting edge is time-consuming, difficult and ultimately exhausting.

There are a few other "seeds" listed as well. Essentially, these "bucking the trend" churches are in danger of falling to high expectations, establishing poor organizational methods, and not accounting well for retaining members when they move into the next phase of their lives. But the thing is, maybe they don't care because, like, they're hipsters.

For your meditation. A cartoon from nakedpastor.

Nothing to add, really.

Misc. Brant on being a radio guy with Asperger's. Gordon Atkinson with a new Foy Davis story. These are always some of his best entries. Leadership Journal on clergy generally being more depressed than laypeople.
By Jeff Nelson
Email ThisBlogThis!Share to TwitterShare to FacebookShare to Pinterest
Labels: Church, Justice Issues, Small Sips, Theology
Newer Post Older Post Home