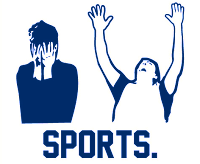 That one thing that happened. The football team of my alma mater, Heidelberg University, is ranked in the Top 25 in Division III, which never happened when I was a student, not even close. This past Saturday, they were #9 and had a big game against #1 defending champion Mount Union. So, then:


No. 1 Mount Union defeated host No. 9 Heidelberg, 44-34, and the defending Division III national champs extended the nation's longest winning streak, regardless of division, to 23 games Saturday in Mayer Field.

“We showed what we can do on the big stage,'' said freshman tailback B.J. Mitchell, who rushed for 152 yards and a touchdown in his second career start. “We fought hard all four quarters. We finally got that chance to prove we belonged where we are.''

Despite losing in front of a record crowd of 4,650, Heidelberg (7-1, 6-1) ended the rainy afternoon feeling almost exactly the same way.

“It was a top-10 matchup for a reason,'' said Heidelberg offensive tackle Quentin Rembert, a senior from Euclid. “We just fell a couple plays short from getting the ''W.' They're No. 1 for a reason, but I think we proved we belong up there, as well.''

For me, it was just fun for Heidelberg to be in the conversation. I got to watch part of it online, and the first half was pretty bad, particularly when Mount had a fake punt that took them almost the whole way down the field. But they gave it a great effort, and I was proud of the kids.

If nothing else, my former classmates and I got to have a moment on Facebook leading up to the game where we reminisced about the old days. So that was nice.

That other thing. There was another football game played on Saturday. One team won. The other team lost. And, I just...


Michigan fans have endured a similar trial, albeit without the helmets impacting us like bullets on kevlar and with the aid of sweet, sweet beer. Over the course of two months Michigan has gone from a program on a rapid upward sweep towards another Ten Year War, Jabrill Peppers in hand, to a shambles much worse than its 6-2 record and seemingly adrift. There's been no whisper of a program that seems as good as Michigan State is right now for seven years, and counting.

The nadir of nadirs was Taylor Lewan turning into Will Gholston, down to the helmet twist on a prone player. That's where this program is right now: talking tough, failing utterly, and taking out their anger on whoever happens to be around.

Anyone still deploying the "little brother" rhetoric should be hit on the head with an oversized mallet and mailed to Waziristan. That was definitive. We're going to need a bigger countdown clock.

I did not watch much of this game. I was flying solo for the first time with both kids, and I just didn't have the attention to spare. I followed along on Twitter for a while, and eventually gave up on that as well once it became clear how out of hand things were getting for Michigan.

Besides that, however, there comes a point where you start questioning how much emotional energy to invest in the enterprise that is sports fandom. Really, disappointment and heartbreak are part of the territory, and there are only a handful of fanbases that almost never have to deal with it. But when it becomes a perpetual experience over a number of years, some kind of breaking point is inevitable, and you have to choose between continuing to embrace the self-loathing or begin starving the beast for a little while.

I don't mean to say, "Grr, rahr, I'll stop rooting for this team until they're good again!" I just mean that Saturday was the sort of moment where you realize that it may be a good idea to take a chunk of the emotional energy you were devoting to this and start spending it elsewhere instead.

That said, my brother and I have tickets to this Saturday's game against Nebraska. I still envision having a good time, sampling some Ann Arbor cuisine, enjoying the atmosphere, being with fellow fans. But the excitement on my part might be a little muted. Or because I'm actually there, it'll reaffirm my fandom somehow. I dunno.

A thing that is not depressing. The first trailer for next year's X-Men: Days of Future Past has been released. Check out the awesomeness:

I bet it's "Ah hee ah hee ah HEE." Matthew Paul Turner shares this church sign, which I in turn am obligated to share: 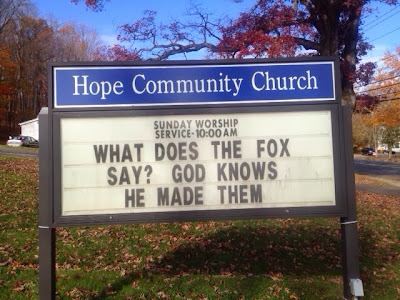 Misc. Jan on issues that face 60-year-old pastors. Matthew Paul Turner also shares this theme song about the "war on Christmas," which I am not obligated to share.
By Jeff Nelson
Email ThisBlogThis!Share to TwitterShare to FacebookShare to Pinterest
Labels: Posts That Prove How Sick I Am, Small Sips, Sports
Newer Post Older Post Home