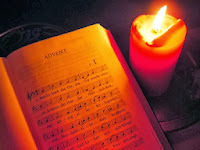 Of course. It was so obvious.

"I've been focusing each week of Advent on the theme of each candle," she said. "So that first week I paid attention to hope, the second week peace, and so on."

Even though the idea is perhaps not terribly original, even though it is the understood encouragement behind the lighting of the Advent wreath, this was somehow novel to me. Seek hope during the first week, then seek peace, then joy, then love. I imagine that most years love gets the short shrift. Rarely do we get a full week between lighting that fourth candle and Christmas Eve.

But to actively and prayerfully seek these virtues, these divine traits through each week? Why hadn't I ever been more intentional about this? Why did this seem like so great a concept to me?

I could chalk it up to a million excuses: busyness and preoccupation of one sort or another. But in the midst of other concerns, where might these greater things be found? What difference would it make to one's preparations and waiting to do this, even and especially while scurrying around to fulfill obligations of holiday, work, and family?

So obvious. Yet not. That, I suppose, is why it's a "discipline."