On the 9th Anniversary of My Ordination 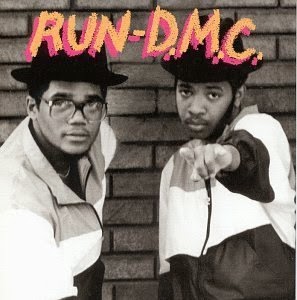 The big gift that I received for Christmas this year was a new stereo. It's a compact unit in wooden casing, made to look like something you would have purchased in the middle of last century. It includes a radio, CD player, a port for an mp3 player, a cassette deck (!), and a turntable.

By far, it was the turntable that excited me the most. I've never been a record collector, but such an enterprise has always intrigued me. I'm not totally convinced by the argument that they convey a better sound quality, but there is nevertheless something about records that I've always been drawn to, even if I've never really acted on them before now.

Naturally, it wasn't very long after Christmas that I started hunting around for my first vinyl acquisitions. My sister-in-law, who knew about this present before I did, started me out with a Mumford and Sons record. As I perused websites and considered my options, I finally settled on Oh My God! by Doug E. Fresh and Run-DMC's self-titled debut.

You see, I listened to a lot of rap and hip-hop in elementary school. Don't ask me what got me started, but during those years this is what you heard emanating from my bedroom much more often than not. Among my favorites were several compilation tapes that featured the above artists among others.

In those years, my family lived in a parsonage with a wide open basement that was well-suited for my brother and I to play in. It was a wonderful place for children to burn off excess energy, which we did quite often. I'd often bring down my tape player, so the sounds of Doug E. Fresh's "The Show" and Run-DMC's "Rock Box" would often accompany our play.

This parsonage was the type that featured a separate door down to a pastor's study in the basement area. We didn't play in that room very often, although it wasn't totally off limits either. There was, nevertheless, something special about being in there for me. It featured a large L-shaped desk, often strewn with papers and books, floor-to-ceiling shelves no doubt featuring the popular thought of the day, and laminate flooring made to look like stone, a sharp contrast with the bare concrete of the rest of that level.

As mentioned, my brother and I didn't play in here often. We understood that it was set apart and not to upset it too much, regardless of whether my father was working in that space or not. There would be, on occasion, times when we'd wander in--even me with my radio--though again, we'd be sure not to touch much of anything. We knew that this was a room for work, even if we didn't really know what the work was about other than what we saw on Sunday mornings.

Nine years ago today, I stood up in front of a mixture of family, friends, colleagues, and members of both my home church and the church to whom I was newly called, and was ordained into Christian ministry in the United Church of Christ. I made promises to live into my calling and to uphold the expectations of the role, to honor the faith and order of my denomination, and to minister as faithfully and as effectively as I could to people regardless of their situation or belief.

I must say that after so many years, I understand that this office into which I am striving to live is set apart, but I'm still learning what it means. I still wrestle with the unique role and its accompanying power and boundaries that I am meant to have among the people to whom I've been called. I struggle with the limits of my own abilities and when to advise people to look elsewhere for assistance or direction. I have only recently been figuring out how best to care for myself in the midst of this vocation's demands. I still wonder about some of the basic stuff sometimes, like how to preach more effectively or what the church is meant to be and do in a new cultural moment.

Even nine years into this, I'm still trying to figure out what this work is about.

My Run DMC album arrived just the other day, rubber banded to the mailbox because it wouldn't fit inside. I promptly rushed it inside and placed the record on the turntable. As the opening drums and guitar riffs of "Rock Box" began to fill the room, I was transported back to that parsonage study. Even so many years later, it doesn't seem like some things have changed very much.
By Jeff Nelson
Email ThisBlogThis!Share to TwitterShare to FacebookShare to Pinterest
Labels: Church, Ministry, My Journey (so far), United Church of Christ
Newer Post Older Post Home