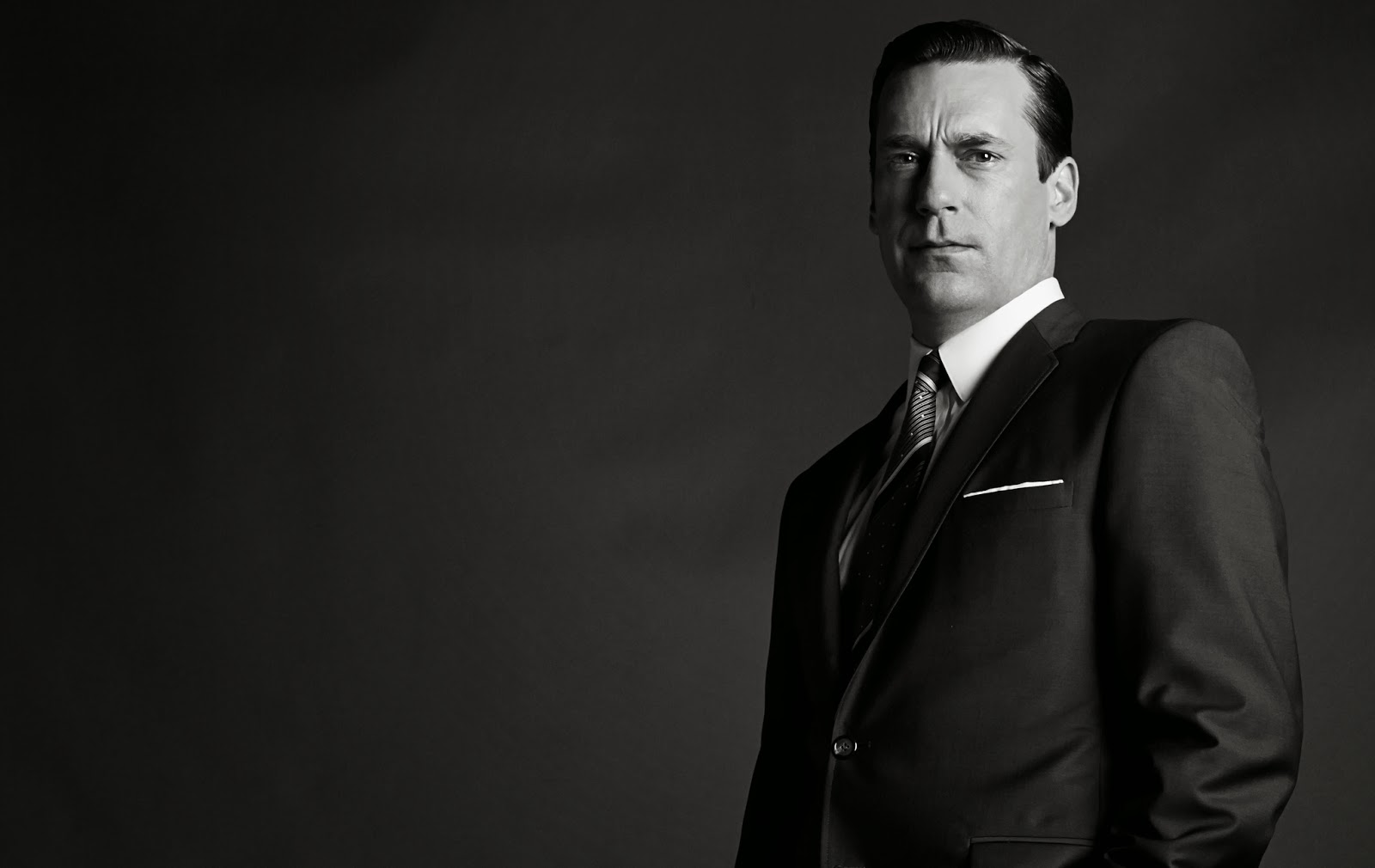 This April begins the first half of the final season of Mad Men, AMC's hit show about ad agencies in the 1960s and their employees.

The show is appealing in that way that shows like The Sopranos, Breaking Bad, and Boardwalk Empire are. They center around the exploits of a male protagonist whose ways are far from honorable, and yet there is something about them to which audiences are drawn. We are meant to be appalled by their actions, yet we also want to root for them. Most other characters on these shows have their own vices as well; people who could truly be considered virtuous are few and far between. We could chalk this up to basic humanity, or to rough past experiences that help explain current behavior, or imperfect situations calling for imperfect answers, among other possibilities.

The main character of Mad Men, Don Draper, is no different. Over the seasons of this show, we have watched him fall over drunk and blow off commitments. We've watched him manipulate people around him in order to get his way (he's as fit for his advertising work as anyone), and we've seen him indulge in perhaps his primary vice, namely sleeping with nearly every woman who crosses his path.

There really isn't much, if anything, commendable about any of these actions. Don is as sleazy as television characters come. But to me, anyway, part of the appeal of Mad Men is that Don always seems to be on the verge of a breakthrough, or at least closer to it than the leading men on the other mentioned shows. There are hints that redemption isn't too far away, if only he would stick with occasional flirtations with the possibility long enough to see where it leads.

A big part of Don's problem, it seems, is his aversion to opening up too much to those around him. The audience is privy to flashbacks that help explain who he really is and why he does what he does. Through these, we learn that he grew up in extreme poverty, raised by people who were not his biological parents in a house of ill repute. Eventually, he jumped at the first chance he saw to change his circumstances: switching identities with a dead soldier while serving in Korea, beginning his lifetime of deception and aversion to letting on too much about who he truly is.

Don's protective armor is thick. Very rarely do we get a real glimpse into how he feels or what he's thinking, save for moments when he worries that someone is going to discover the truth. Meanwhile, he acts out through alcohol and affairs, and through his work. The surest thing that we know about him, other than that he really doesn't like letting anyone into his life in an authentic way, is that he numbs this aversion through one addiction after another.

Don's is a cautionary tale for pastors. We could almost watch this show as an example of what can happen to people in ministry if they aren't careful. The example is perhaps an extreme one, but there is a lesson to be learned from Don's methods.

Consider the role of pastor; its expectations and demands. Any basic introduction to boundaries will tell you that the pastor is in a position set apart from those he or she serves. This is not to say that pastors are above the people they are called to serve, but that the pastoral position comes with power and a certain amount of distance. Make no mistake that we pastors are called to be genuine with our congregation, but also aware that we play a role in the church that is relationally different from member-to-member interaction. Difficult moments call for a certain professional approach; rarely, if ever, are we allowed to "bleed on the congregation," as it were. We are encouraged to go elsewhere for such outlets, be it a counselor, spiritual director, or peer group.

The difference between intentionally seeking and not seeking these outlets can be huge. If we are not intentionally, actively sharing and processing our struggles, our "hidden selves," with others, the possibility of acting out in unhealthy ways--particularly among our congregants--increases. The chances of engaging in unethical or abusive behavior are greater if we stay inside our shells, protecting ourselves against any kind of appropriate vulnerability, insisting that we can handle it or that it'd be better for everyone if we just figure things out by ourselves.

This is a growth area for me. For the longest time, I was a very self-reliant person. Even though I like to think that I've made progress over the past year or two, I still fight a tendency to just deal with problems on my own. When I was a solo pastor, this tendency only increased. Thankfully, I never acted out in harmful ways among my people, but there was still damage done in other ways. And now that I realize the importance of letting down my guard and sharing myself where appropriate, I think that I and the people around me are better off.

The most recent season of Mad Men showed the beginning of Don's own shedding of armor. By the end, he displayed a much greater willingness to share his past, his true identity, with his family and co-workers. It brought a cost, but the desire for liberation had finally become greater than the desire to hide. Would that we pastors would also pursue the former over the latter.
By Jeff Nelson
Email ThisBlogThis!Share to TwitterShare to FacebookShare to Pinterest
Labels: Church, Ministry, My Journey (so far), Pop Culture Commentary
Newer Post Older Post Home