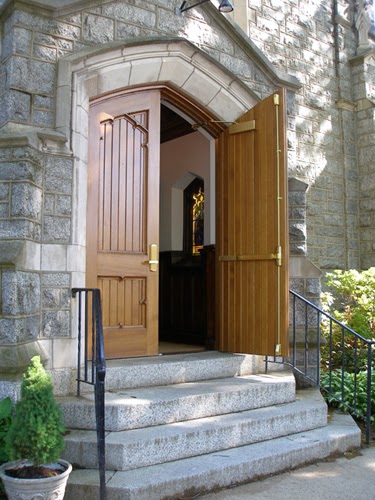 When I was in college, I played in a worship band at a United Methodist church some 10 miles away from the school. The church at that point was taking a lot of cues from a fellow UMC, Ginghamsburg Church in Tipp City, which you may have heard of. Ginghamsburg had found great success transforming and growing itself through many of the methods common to megachurches in that time, and this country church in little Old Fort, Ohio was just beginning to find its own niche through some of these techniques as well. Last I checked, they're still thriving, incarnating the gospel in their setting as best they can.

In those days, the primary word used to refer to the people that churches wanted to attract was "seeker." The larger movement went by the name "seeker-sensitive:" a highly attractional-based philosophy where churches did their best to offer programs and amenities that people either disillusioned or unfamiliar with the church might find worth checking out as an entry point for a life of discipleship.

The term "seeker" was meant to denote one curious enough about the church or faith to at least try out what the church was doing. Perhaps, the reasoning went, these seekers would find new energy in this faith community due to its laid-back atmosphere, worship alternative to the old-timey hymns, and generally an experience that seemed less removed from what people were used to the other six days of the week.

There's plenty to critique about this approach, and plenty of others have written those critiques over the years. That's not my concern. At some point in the last decade or more, I haven't heard the term "seeker" as often, if ever. Part of that simply may be that I don't run in the same circles any more and just don't hear it. Another possibility is that with the rise of the emerging church (which started as a group of guys who decided that the usual megachurch approaches weren't going to work for the next generation) that it fell out of use.

A term that I have heard much more often lately is "church shopper." When someone uses this phrase, it's usually meant to connote a type of person who wanders from church to church, never really commits anywhere, chiefly wonders what a particular church can offer them (as opposed to what they can contribute), and uses faith in general as an accessory to show off more than a transformational way of life.

There are particular groups to whom I've seen this term applied. First are those who use or have found meaning in the megachurch model described above, moreso if they've left a more traditional church in the process. Second are those who have identified as "spiritual but not religious," whom some have deemed spiritually wishy-washy and self-centered. Regardless, it's hardly ever used in a flattering or endearing way.

All told, there are likely some who are seeking Sunday morning entertainment or are more interested in what the coffee bar is serving than a better understanding of how the Sermon on the Mount applies to their lives. However, how many more who wander into a brand new church on any given Sunday desire healing from something that happened in a former congregation, were curious enough to step inside for the first time with no expectations other than maybe this place could help them make sense of their life, felt out of place elsewhere and are looking for a new community in which to get involved, or any number of other reasons that go way beyond wanting a cool hangout where they feel good and are never challenged?

If we start right off by referring to these people as "church shoppers," we've decided to view them in a certain way. By using this term we've already made a half-dozen or more assumptions about why they've shown up and how involved they might be in the future. We've already dismissed their journey and reasons for attending, and have already decided they aren't going to stick around (a "church shopper" by definition is eventually going to choose a place to stick with, hence the "shopper" part, right?). It likely follows that viewing visitors as selfish consumers leads to treating them as such, whether we're conscious of it or not.

The reader may not think much of the "seeker-sensitive" movement, but at least the term "seeker" is hopeful and puts forth a view that this person is worth engaging, i.e., they are seeking; let's help them find it. Meanwhile, if I decide that one is a church shopper, I am already suspecting their intentions, may not take them very seriously, and may even hope that they disappear as quickly as possible so that I can get on with real ministry with these other people.

In truth, who knows why someone has wandered in looking for a new church home? Could it be that the question they are asking is not "What can I get from this place?" but "How can I participate here?" Could it be that they are looking for a place that is more welcoming, more open to exploring the hard questions, a truly safe place where they can finally be themselves, a place that is more intentional about reaching out in hospitality or mission?

Calling them church shoppers suggests that we think we know why they've come, when in truth we don't.

Maybe they're seeking something. Maybe we can help them find it.
By Jeff Nelson
Email ThisBlogThis!Share to TwitterShare to FacebookShare to Pinterest
Labels: Church, Ministry
Newer Post Older Post Home