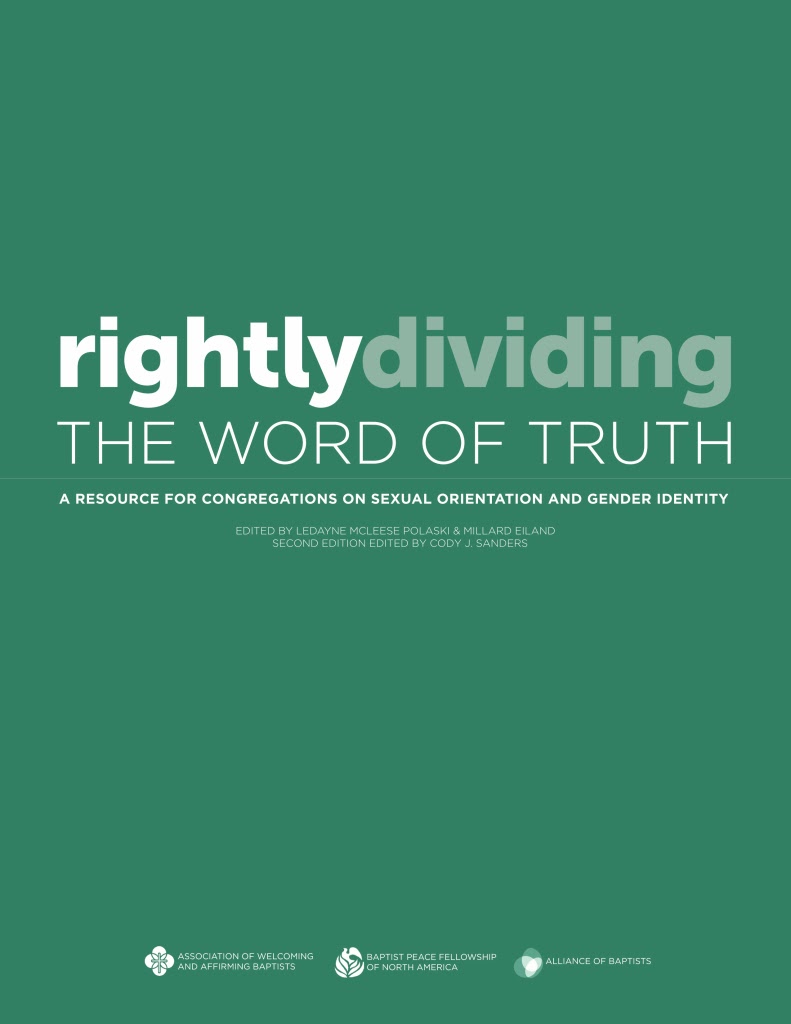 This is the setting: you, the readers, are either clergy or lay leaders of a congregation who are wanting to begin or continue a conversation about the explicit inclusion of persons of same-gender orientation in your congregation; and we, the writers, are representatives of thirteen Baptist Congregations who have engaged in that conversation. - Mahan Siler, "The Congregational Response to Gay and Lesbian Persons," Rightly Dividing the Word of Truth

When I finally came to the conclusion that homosexuality is not a sin, it was after a long process that included many different factors. The movement started in college, during which the "What Would Jesus Do?" phenomenon was full strength, when I first began wondering how a disciple of Christ really should approach those who identify as lesbian, gay, bisexual, and trans*, the eventual landing spot being something other than with judgment and vitriol, and also not primarily from an intent to "cure" or convert.

There then came a time of studying what the so-called "proof texts" from scripture actually talk about, considering their context and verbiage more closely. I eventually came to understand the story of Sodom and Gomorrah, the various Levitical verses, and the lists in Paul's letters very differently: either they were about something else entirely, were not necessarily applicable to modern situations, or were addressing something much more narrow than we think.

The biggest factor, of course, was actually meeting gay people. In particular, I still recall somewhat vividly a car ride with a gay man during General Synod in Kansas City the summer of 2001, during which he shared his experience of self-discovery, the last vestiges of my former beliefs finally snuffed out.

The resource Rightly Dividing the Word of Truth seems to understand that coming to a new understanding of faith and homosexuality is multi-faceted, and addresses the issue accordingly. The original book was published in 2000 by the Association of Welcoming Baptists, the Baptist Peace Fellowship of North America, and the Alliance of Baptists, all more progressive groups that claim a name one may associate with more conservative causes. A new edition, edited by Cody Sanders, was published in 2013.

Let's get this out of the way: the book is not interested in giving "equal time" to those who believe in something other than the full inclusion and affirmation of people who identify as LGBT. Rather, it is a comprehensive--even exhaustive--compilation of different articles and voices, some Baptist and some not, who provide insight and analysis of the many aspects of why such inclusion and affirmation is important and needed, especially in the church.

The book is organized into sections, beginning with a series of articles on the passages used to justify calling homosexuality a sin. While a few of them are dedicated to breaking down these texts, more than one also notes the evolution of interpretation, using as an example how our understanding of texts advocating slavery has changed. The last article in this section introduces the metaphor of Bible as family album, which gives us permission to debate with our faith ancestors about what they wrote.

The next section, a series of articles on theology and spirituality, is one of the most extensive. Many employ a mix of personal anecdote, theological commentary, and cultural observation to demonstrate current oppressive attitudes that LGBT people face, as well as how Christian beliefs and practices such as welcome, caring for the oppressed, the cross, and body/spirit integration and incarnation help people of faith respond in positive ways to these attitudes. James B. Nelson, a noted writer on theology of the body (and no relation as far as I know), provides one of the most helpful articles in this section.

The next three sections offer personal experiences from individuals, families, and congregations who over time learned to accept themselves or integrate and apply a more loving and welcoming understanding of LGBT issues. While the other sections are important, these sorts of stories are the most powerful, and, in my opinion, help make these issues much more human and real.

There follows from here a series of articles on the psychological and biological factors involved in the LGBT community, not only analyzing what causes one to identify as such, but also the damage that negative experiences such as bullying and exclusion exact. In a multifaceted way, this section shows how and why identifying as LGBT is not like flipping a light switch; rather, it is the result of various genetic, environmental, and psychological factors that are normal, natural, and healthy.

The last section is a series of meditations and sermons, which may be helpful particularly for clergy and other church leaders in figuring out how to offer advocacy to their congregations.

I found Rightly Dividing the Word of Truth to be quite a treasury of information and commentary for people and churches seeking to become more inclusive and affirming. Those who compiled this volume understood that such a search involves addressing multiple factors at once: Biblical interpretation, theological application, personal narrative, and scientific analysis. It took reflection in at least three of these areas over a period of a few years before I came to my own new understanding. Likewise, people and congregations certainly may take their time wrestling with what these authors present so that such an understanding may be discerned, as the title says, rightly.