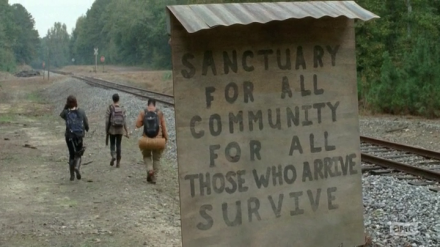 On April 1st, Rachel Held Evans wrote some thoughts in the aftermath of a week when World Vision announced that they would employ people in same-sex relationships, then backtracked a few days later after thousands of good, faithful, evangelical, Bible-believing Christians threatened to, or really did, pull their sponsorships of impoverished children.

Please note the sarcasm in the last paragraph. Read no further unless you can see it. Thanks.

In part, here is what Rachel wrote:


For many years, I felt that part of my call as a writer and blogger of faith was to be a different sort of evangelical, to advocate for things like gender equality, respect for LGBT people, and acceptance of science and biblical scholarship within my community. But I think that perhaps I became more invested in trying to “fix” evangelicalism (to my standards! oh the hubris!) than in growing Kingdom. And as helpful as I know that work has been for so many of you, I think it’s time to take a slightly different approach.

So rather than wearing out my voice in calling for an end to evangelicalism’s culture wars, I think it’s time to focus on finding and creating church among its many refugees—women called to ministry, our LGBTQ brother and sisters, science-lovers, doubters, dreamers, misfits, abuse survivors, those who refuse to choose between their intellectual integrity and their faith or their compassion and their religion, those who have, for whatever reason, been “farewelled.”

Instead of fighting for a seat at the evangelical table, I want to prepare tables in the wilderness, where everyone is welcome and where we can go on discussing (and debating!) the Bible, science, sexuality, gender, racial reconciliation, justice, church, and faith, but without labels, without wars.

To me, Rachel sounds very tired. She's tired of trying to be part of a strand of Christianity that seems to be becoming narrower, more insulated, and further from what she and many others believe to be what following Jesus really looks like. And as she says above, being "a different sort" in the same camp just doesn't seem to be worth it any more. This World Vision issue just seems to be the final straw. What seems more fruitful, on the other hand, is to create a new community among others who feel disaffected from that larger community.

As one born and raised in the United Church of Christ, a tradition notably more progressive and inclusive, I support what Rachel is doing. Her message is really one not unlike what many in the UCC have adhered to for a number of years. She and many other Millennials in particular seem to be drawn to an incarnation of faith that is more welcoming.

This is not without some pain, of course. Even though one may seek sanctuary in a new community, it also means severing ties with an old one. Even though certain beloved practices may carry over, it still won't be the same. Some relationships might not survive. Some beliefs, even treasured ones that had once served as lifelines or helped provide a sense of commonality and belonging, might not either.

My own stay in evangelicalism was not extensive. It didn't last more than a few years in late high school and early college just as I was starting to really wrestle with both my faith and a sense of call to ministry. You might say that I dabbled at best, as even when I was deepest in certain aspects of the evangelical tradition, my experience was still colored by my UCC background and the scholarship of my religion classes, which kept me from ever really going "all in," as it were.

I felt like an exile for a little while after it became clear that I didn't really belong. Like Rachel, I tried to hold on but I should have let it go a lot sooner than I did. Some of us have such good intentions and high hopes about remaining, and are quite often disappointed.

For a while, I stayed in that exile mindset. But nowadays, I think that maybe I'm more supposed to be one of the ones helping to provide sanctuary. I can relate to the experience, sure, but how many of us may be called more to provide a safe haven for those who have finally realized that they can no longer stay, and who grieve not only leaving but what caused them to conclude that leaving was their best option?

It can be a huge and painful thing to leave the faith tradition that helped shape your life, especially after realizing that it will no longer make room for you; that even though you've changed, it refuses to change with you.

I hope that I can do my part to be welcoming; that I can listen to and honor what evangelical exiles need. Sometimes I wonder how well we communicate that there are other possible places where they can hopefully find the fellowship and understanding that they need.
By Jeff Nelson
Email ThisBlogThis!Share to TwitterShare to FacebookShare to Pinterest
Labels: Church, United Church of Christ
Newer Post Older Post Home