As I mentioned back in January, I anticipated that this year would be a year of big decade milestones. The first one comes officially next month, but the celebration was just this past week as I traveled back to Eden Theological Seminary in St. Louis for their spring convocation and for my 10-year class reunion.

It's been a few years; various circumstances have kept me away lately, but I knew that I wanted to be back for this one. Eden has been a beloved, meaningful place for me that served as a site of incredible growth and learning, and to make the trip for this event was very important to me regardless of the program offered.

Thankfully, the drive was like falling off a log. It was long, but it was very familiar. I remembered directions, landmarks, roads…even after so long, it came quite easily. I was thankful that, even as I reached the complicated web of highways close to the bridge over the Mississippi River, I could recall exits and merge lanes that eventually landed me at my hotel, and to campus the following day.

The theme of the gathering was "Power: Its Use and Abuse." It featured Dr. Thomas Long, he of the defining preaching textbook The Witness of Preaching, as well as three of Eden's newer professors, each speaking on something related to this topic.

Professor of Old Testament Laurel Koepf Taylor went first, sharing some of her research regarding how children are viewed in scripture, in history, and in modern times. This was one of the more impactful lectures of the gathering for me, as she noted that actions, policies, attitudes, and emphases of churches and societies reveal how they value children more than mere rhetoric (although she also pointed out how much rhetoric about children is used, particularly around election time). I came away from this lecture thinking about my own church's practices regarding children and what they say about how we value them. It was quite thought-provoking. 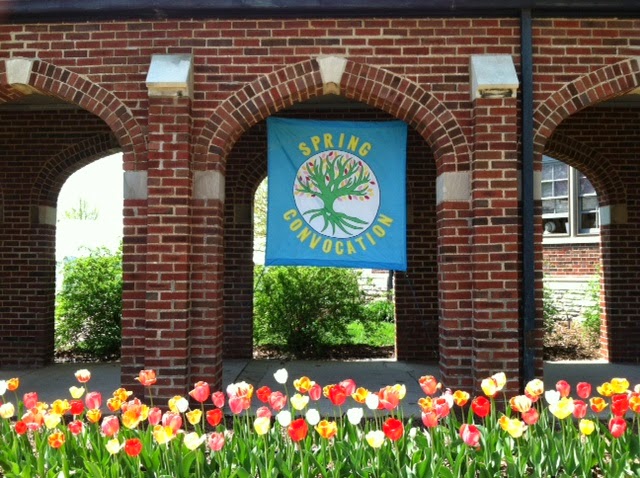 Adam Ployd, Professor of Church History and Historical Theology, was up next with some thoughts on Augustine and the way his theology, for better or worse, continues to influence the church and individual Christians. He talked quite a bit about progressive Christianity's relationship to civil authority, and how we--like many other strands--critique it and want it to work for us when each seems to work to our advantage.

Dr. Long was up the following day for some reflection on parabolic preaching. He talked about how a narrative style of preaching--as opposed to more didactic styles favored particularly by megachurches--can provoke and subvert listeners' thinking, much like Jesus' parables. Both times that I've heard Long speak, he has quite a unique way of delivering his material that is incredibly captivating. I was totally fanboying the entire time.

Finally, we heard from Leah Gunning Francis, Professor of Christian Education, on the narrative of young black men presented by the media and the importance of presenting a counter-narrative. She used the examples of Trayvon Martin and Jordan Davis, two young men killed and whose murderers walked free in part because the narrative presented about Martin and Davis were that they were angry threatening thugs who needed to be put in their place, part of a larger story that many outlets and pundits seemingly want to keep in place for a variety of reasons. This was a powerful, convicting lecture that really stirred the audience's passion and emotion.

So the program was good, but that's not all I did. I had to have pizza at Racanelli's. And frozen custard at Ted Drewe's. And Schlafly beer with at least one meal (and a couple cases to bring home). While I didn't get to my favorite coffeehouse, I did experience a newer place called Blueprint Coffee, which brews their own blends right then and there and serves it to you in a beaker. A beaker. There was time to reminisce and reflect, to catch up with good friends and colleagues and professors, to experience the ever-changing look and landscape of the campus and surrounding community.

It wasn't just the classwork that formed and shaped me during those three years. It was the entire experience of Eden and St. Louis. It was a pale ale shared on a Friday evening while swapping stories from field education placements. It was late evening sessions reading for class at a half dozen different coffeehouses around the city. It was sunny Saturday afternoons at Grant's Farm or just lounging in the apartment courtyard. And so to be able to revisit where all that formation happened, even so many years later, was so refreshing for my soul.

Don't get me wrong. The place is different. There have been renovations and reconfigurations. But I didn't and don't want to be that alumni who constantly grouses about the Old Days. Those times were wonderful, but building on them has been just as important for me in the past ten years as referencing back to them, much like the institution itself seems to be seeking to do.

I wouldn't have missed this milestone for anything. Well, almost anything. But I was so thankful to be able to attend. I hope that it won't be so long between visits next time.
By Jeff Nelson
Email ThisBlogThis!Share to TwitterShare to FacebookShare to Pinterest
Labels: My Journey (so far), Quotidian
Newer Post Older Post Home