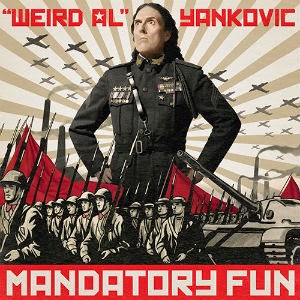 1. Jesus on the Mainline released their self-titled EP this month, and it's quite good. If you like The Black Keys, The Dirty Dozen Brass Band, Mumford and Sons, and/or Delta Rae, they're basically a puree of those groups. Unfortunately, they don't have anything that I could find to embed on here, but trust me on this. I'll sing this band's praises as they steadily gain mainstream attention.

2. We took Coffeeson to go see How to Train Your Dragon 2 this month. In this second offering, which takes place years after the first, Hiccup has really come into his own as a dragon-training tech whiz, and his gruff father has been dropping strong hints that he is to succeed him as chief of the village. That all gets sidetracked as a new threat emerges in the form of Drago Bludvist, a brutal viking with big plans to form a dragon army. Along the way, Hiccup learns more about his family and about his own capacity for leadership and diplomacy. This was a slightly darker, more mature film than the first, but I like that it didn't trivialize some of the themes it chose to portray. They saw certain things to their inevitable outcome honestly and tastefully.

3. A few weeks ago, I heard "Beautiful" by a band called Wussy, and I was taken by it so much that I wanted to listen to the entire album from which it came, Attica. It's quite an eclectic album, as you get dirty driving rock on "Rainbows and Butterflies," and then comes the wistful country sounds of slide guitar and piano on "North Sea Girls." One song is so incredibly different from the next, which is an easy way for an artist to reel me in. So here's "Beautiful:"

4. The entire family has been enjoying "Weird Al" Yankovic's latest album, Mandatory Fun, which came out a few weeks ago. With every successive album that he releases, I worry that I'll know less and less of the songs that he parodies, but these were pretty recognizable. He sends up Lorde, Pharrell, Imagine Dragons, and Crosby, Stills, & Nash, among others. In conjunction with the album's release, he spent eight days premiering a new music video each day. My favorite is "Word Crimes," his send-up of Robin Thicke's truly awful "Blurred Lines." It doubles as a public service announcement:

5. The second series of Ricky Gervais' Derek was recently added to Netflix. I watched the first near the beginning of the year and was taken by its sweetness and the attention that it pays to a population (those in nursing homes) that is largely ignored by society other than for the occasional joke. Derek himself is developmentally delayed, and is able to seek the good in everyone with whom he works as he dishes out encouragement, affirmation, and kindness to all of them. During one exchange with a successful banker who tries to convince him why people want better jobs so they can get more money, Derek says, "I get to be with these people. What's a better job than that?" I admit that I'm a bit of a sap, and some may see this show as a bit too sappy, but I've found it a wonderful portrayal of genuineness and love for others.