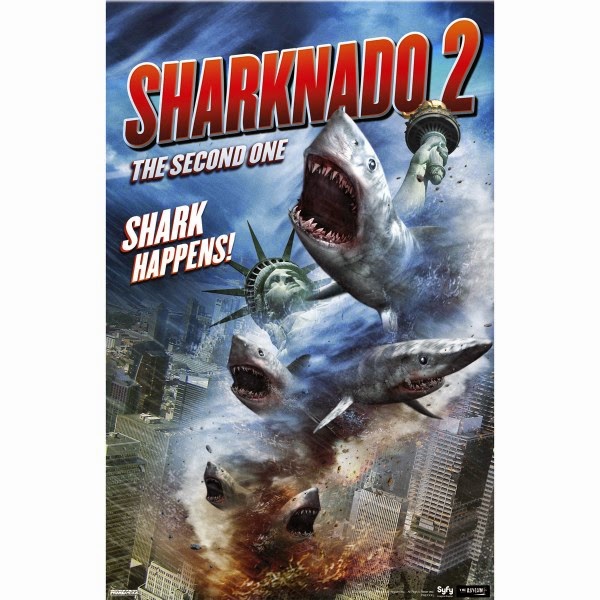 Five items for August, plus a few more…

1. We watched Sharknado 2: The Second One on the SyFy Network late last month. Or more accurately, I watched it and Coffeewife suffered through it. The basic gist is pretty much what it sounds like: Ian Ziering and Tara Reid reprise their roles from the first movie, their characters traveling to New York. In very short order, a huge storm begins to brew over the water, sucking up tons of sharks as it heads to shore. The majority of the movie is the two of them running around through the city along with other nominally recognizable actors, some of whom get appendages bitten off or just plain eaten along the way. There are explosives, baseball bats, and a buzz saw arm prosthesis used for defense, among other creative weaponized items. Like its predecessor, the movie knows exactly what it is and doesn't try to be any more, and that's why I've taken found them such a guilty pleasure, to Coffeewife's eternal dismay.

2. I have been a big fan of Lev Grossman's The Magicians series since reading the first book of same name several years ago, which is basically the edgier college version of Harry Potter crossed with parts of The Chronicles of Narnia. Since experiencing that first book, I've eagerly anticipated each follow-up, first with The Magician King in 2012 and The Magician's Land, released this month. Here in this third installment, Quentin is piecing his life back together after events from the second book and now, just as he is finding his way again, certain figures he thought long gone from his life reappear, throwing everything into chaos all over again. This has been as satisfying conclusion to the trilogy as one could hope for, and I'd rather this series get chosen for movies over and against certain other ones Hollywood has been picking up lately.

3. Coffeewife has been getting into the Divergent series, and recently purchased the first movie's DVD. She greatly encouraged me to read the book, but wanted to go ahead and watch the film before I had a chance to read it. I didn't really mind much, so I went ahead and sat down to watch it with her. So, in a dystopian future where the nation has been separated into different categories in order to keep the peace, a female character who is a bit unsure of her place becomes aware of a megalomaniacal leader's plot to keep this peace through force, particularly those who defy the pre-arranged categories. While it's not exactly The Hunger Games, there were certain similarities. Anyway, I did enjoy the movie but am not exactly rushing to read the book.

4. I've taken to playing music when it's just me and the kids hanging out. I figure I'd much rather do that than have them watch TV. So while perusing my music collection, I figured I'd pop in one of my Keller Williams CDs. So we listened to a little bit of his live album, Stage, before it was time for bed. But as I've only ever heard a fraction of Williams' stuff, I took to Spotify to hear more. In short order, I listened to Dream, 12, and Odd. Williams is an incredible talent who plays a wide variety of instruments with unique arrangements and clever lyrics. I'm actually kicking myself for not listening to more of his stuff before now. Here's one of my favorites so far that I've heard from these albums, "Environmental Song:"

5. I don't think I've ever written about Meytal Cohen here before. I first discovered her during a random search on Youtube for drum solos and came across her many covers of the drum parts of her favorite songs, most of them metal. She's helped inspire me to get back to my drums after being incredibly neglectful of them. She's slowly putting together tracks for an album, the most popular of which so far seems to be "Breathe:"

6. I watched the movie version of World War Z this month, overcoming an incredible amount of skepticism having read the book last year. Brad Pitt plays Gerry Lane, a former UN investigator who is pulled back into action after a zombie epidemic begins spreading across the world. As a movie based on a book, it is basically nothing like its source material. Part of that is the book being organized as a series of accounts after the fact. Beyond that, however, the movie doesn't really respect the mythology that Brooks presents, portraying the zombies as fast-moving and animalistic rather than slowly ambling reanimated corpses. Taken on its own terms, however, it's put together well, but less as a horror film and more as an action thriller.

7. I also watched A Late Quartet, starring Christopher Walken, Philip Seymour Hoffman, Catherine Keener, and Mark Ivanir as members of a string quartet that has been together for 25 years. When Walken's character is diagnosed with Parkinson's, it sets off a series of dynamic shifts among the other members that threatens the continuation of their group. Each not only deals with the news of their friend's health and the inevitable affect it will have on their quartet, but each also wrestles with issues related to ego, desire, and their place among the others, some of which have been bubbling under the surface for quite some time. And yet it is their commitment to the quartet, something larger than themselves, that serves as their reference point while dealing with these other issues. I don't recall this being a very widely-distributed or publicized film (the only way I even heard about it was a preview on a DVD), but I thought it was a well-done exploration of relational dynamics, as well as a love letter to classical music.
By Jeff Nelson
Email ThisBlogThis!Share to TwitterShare to FacebookShare to Pinterest
Labels: Pop Culture Roundup
Newer Post Older Post Home