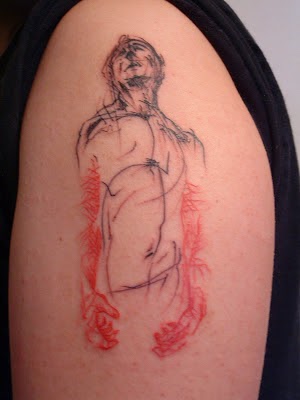 This is a topic I don't write about often. In fact, I can only think of four blog posts in nearly 10 years where I mention it with any depth, the last one of which was at least four years ago.

So, I got my fourth tattoo on Friday.

The typical person wouldn't know I had any, let alone four. The only ways people find out is if I or somebody else tells them, or if there's some occasion that calls for no sleeves or shirt. I don't really hide them, but I don't really broadcast them either.

First and foremost, my tattoos are mine. I consider each very carefully and have gone years in between getting each one. They're permanent body art, after all. From my point of view, it's not something you rush into doing, although countless spring breakers might disagree. Each of them have to do with who I am, what I represent, what I think, what I want to remember. I don't do cartoon characters or sports logos or tribal designs. I don't want to get something that seems to be based on a fleeting whim.

So now that I've brought it up, I'll go ahead and tell you what they are:


"Luke 24:34," upper right arm - The short version is that, in a moment of deep despair and a horrible crisis of faith, the Spirit led me to this verse: "It is true! The Lord has risen and has appeared to Simon!" I consider that moment incredibly pivotal in my faith journey. For a slightly longer version, read this.

Crumbling stone cross, right shoulder - I wanted to get a cross, but I didn't want to get a "pretty" cross. The cross isn't pretty, and to get something ornate didn't feel right to me. It also carries my own cynical statement concerning the state of the church.

"Full Failure All-American Hero" by Derek Hess, upper left arm - See the pic above. Basically, I like the statement that it makes about human limitation; realizing who you really are rather than what you try to portray yourself to be.

The flame logo of my spiritual direction program, upper back between my shoulders - The newest one. It's a celebration of the studies I'm completing, but also represents my interest in spirituality and contemplative practice.

So, why am I revisiting this topic now?

I've always vacillated between getting ink in a more visible location, namely my wrist or upper forearm. On the one hand, it's my body, and might also open some doors with people who ordinarily think too much of talking to a pastor. It may, on the other hand, close other doors. People can be funny about what pastors--or professional people in general--ought to look like.

The latter has a judgmental ring to it, that I acknowledge. I've been round and round about this in my head, believe me. The open doors should matter much more than the closed ones. Imagine someone who never thought much of what pastors or churches could be like reacting to this member of the clergy with ink on his wrist. Hey, look, we're actually kind of normal after all!

In fact, two of the four times I've gotten tattoos have featured conversations with people in the shop about my being a pastor or faith in general. It could be argued that if it wasn't for my tattoos, those discussions wouldn't have happened. After all, I wouldn't have been there otherwise. This is what I mean by open doors.

A colleague recently made the observation that in another ten years or so, this topic won't matter. Her point was that tattoos have become so commonplace that it won't be considered strange at all that pastors have them. Maybe in some ways we're already there, but old attitudes are still hanging around and may take at least that long for them to really lose influence.

This observation gives me hope, as it points to at least one less thing that churches and society in general will judge each other over. It's a long list, and there are plenty of more pressing items on it that need to be addressed anyway.

But maybe instead of waiting for the cultural climate to be right, I should help change it instead.

Maybe that's what I should be considering.
By Jeff Nelson
Email ThisBlogThis!Share to TwitterShare to FacebookShare to Pinterest
Labels: Church, Ministry
Newer Post Older Post Home