Lessons for the Church from Michigan Football 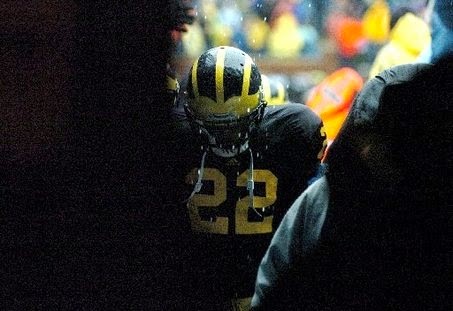 Those who have been reading this blog for a reasonable length of time know that I am a big Michigan fan. I was born near Detroit, spent the first eight years of my life in various communities around the state, and even though I've been a resident of Ohio for over four times as long as I ever was in Michigan, I've always remained loyal to Tigers, Red Wings, Pistons, Lions (more or less), and most importantly to me, Wolverines.

If you're a fan of college football, then you're likely aware of what has been happening in Ann Arbor this season. Head coach Brady Hoke has been quite embattled, both for on-field results (a 2-4 record amassed so far) and for player safety issues: the hot topic after Michigan's loss to Minnesota wasn't the loss or how badly the team played, but the handling of quarterback Shane Morris, who even after exhibiting concussion symptoms was left in the game.

The aftermath of that incident didn't improve. MGoBlog sums up the three ways Michigan handled public relations after the fact:


1) Two-paragraph statement with boilerplate language about student health that claims Morris was removed from the game because of a leg injury and doesn't even mention the possibility of a concussion.

2) Testy Hoke press conference in which Hoke says Morris would have practiced Sunday if not for a high ankle sprain, says there is a statement from medical staff forthcoming, says he hasn't talked to [Athletic Director Dave] Brandon since Saturday.

3) Medical staff release becomes Brandon statement released at 1:30 AM in which it is admitted that Morris had a mild concussion BUT BUT BUT all this other stuff.

Late-night statements and confrontational press conferences exhibiting ignorance and avoidance don't really do much to build confidence in your ability to honestly address a serious situation. Instead, they're the sorts of actions that signal a circling of the wagons and an atmosphere of self-protection against what objectively could be considered valid criticisms that, when taken seriously, could help the person, program, or institution in question assess and improve who or what it is or does.

But sometimes instead, people being taken to task issue statements at odd times that say the things people want to hear, and aside from that statement don't do a whole lot differently:

This is the opposite of transparency and owning your mistakes.

It has to be noted here that AD Dave Brandon is actually considered a big part of Michigan's problems by many. A sampling of reasons, besides his handling of the Morris situation, are summed up in this Business Week article:


“Brandin’ Brandon,” as some dismayed Wolverine fans now call him, decided Michigan’s gold brand wasn’t gold enough. Military flyovers, fireworks, and skywriting became part of the ol’ color and pageantry. Prices for tickets and concessions went up. New sales policies made it harder for students to sit with classmates. Chobani—which makes yogurt, not bratwursts—started sponsoring Michigan football tweets. After Beyoncé introduced the halftime show at a game last year, Brandon said, “That’s a pretty powerful message about what Michigan is all about.”

People aren't just mad about the on-field product. It's how he addressed the Morris incident, ticket policies and concession prices, sponsorships, and a whole lot of gimmicky add-ons that many find unnecessary to a college football atmosphere.

Ramzy Nasrallah, a writer for the Ohio State blog Eleven Warriors, sums up the issues at Michigan that go way deeper than wins and losses (slight language warning):


Maybe you enjoy seeing Michigan's struggle, but this type of unthinkable decline is capable of happening anywhere - especially at our favorite ivory tower. All it requires is unchecked power in the hands of the wrong goddamn person guarded by influential people supporting him or her for all the wrong reasons.

Ramzy echoes a lot of what many others have written: the problems at Michigan largely stem from people with power not being held accountable or deflecting any and all manner of scrutiny and evaluation, in part because the system is rigged to allow it.

By this point, you may be wondering what any of this has to do with the church. Or maybe you've already started making the connection.

For a moment, remove college football from the situation above and focus on the behavior. When we do that, we end up with a series of inactions, missteps, and statements tone-deaf to outside perceptions and preferences. We have one or more figures showing by their actions or words that they don't especially care to answer for themselves. And we have an institution as a whole that doesn't seem to have much in the way of checks and balances to correct this, opting instead to insulate the people involved or the entity as a whole. What matters most is not accountability or transparency, but preservation of power and position.

We've seen plenty of this happen in churches or church entities even within the past several months.

There has been the ongoing problematic addressing of sexual abuse within the Roman Catholic church, where for so long abusive priests were simply shuffled around. Thankfully, Pope Francis has been changing this culture.

There has been the increased backlash against Mars Hill Church in Seattle, where Mark Driscoll has undergone increased scrutiny for his behavior and misuse of power. Eight out of nine pastors who signed a letter calling him to account have been removed from leadership.

There has been the recent saga at General Theological Seminary, where eight professors were fired after protesting the seminary president's behavior and asking for a hearing with the Board of Trustees. In a letter to students and others, the president claimed they resigned, which they did not.

Each of these instances features what's highlighted in the Ramzy quote above: "unchecked power in the hands of the wrong person guarded by influential people supporting him or her for all the wrong reasons." Any institution, including the church and its related facilities and hierarchies, can succumb to self-interest and a desire to preserve power at the expense of its true mission and constituency.

In the General Seminary case, one blogger is quoted thus:


According to an analysis by Episcopal priest and blogger Rev. Canon Andrew Gerns, Dunkle appears to have a tendency to push through “Lone Ranger” decisions in order to fulfill his vision of what is best for the school.

“The leadership is so intent on their goal and so committed to a single over-riding vision, that they appear to have forgotten who it is they serve, who it is that makes the mission happen and who must live with the decisions in the long run,” Gerns wrote for Episcopal Café.

When the church falls into this sort of predicament, it's especially tragic because we purport to serve a higher calling and seek to hold ourselves to a higher standard. We follow one who said things like, "the greatest among you will be your servant" and "those who are humble will be exalted" and "blessed are the meek, for they shall inherit the earth." It's hard to show humility and meekness if your primary concern is avoiding answering for yourself at all costs.

Unfortunately, institutions lend themselves to this kind of behavior rather easily. Put in the right structure and surround yourself with the right people, and you won't have to worry too much about who you serve or publicly answering questions about sins committed, since you'll have "more important things to do."

This is why younger generations in particular are wary of the institutional church. They see stuff like this happen and wonder whether the church could ever truly be what it says it is as opposed to what it practices. We as the church should be concerned less about preserving The Brand and more about the mission we've been given. That is the more important thing.
By Jeff Nelson
Email ThisBlogThis!Share to TwitterShare to FacebookShare to Pinterest
Labels: Church, Sports
Newer Post Older Post Home