No earthly good. Funeral director Caleb Wilde has some opinions on how focusing too much on heaven during times of mourning can hurt the grief process:


It’s unhealthy because it can too easily take away your grief work.  It’s a “get out of pain for free” card that all too many play to the detriment of their personal growth.  In the same way that I disdain a person buying a fake online PhD, so do I distain this attempt to skip the labor of grief, the growth of grief and the personal evaluation that inevitably comes with death.

Pastoral colleagues and I regularly grouse about cliches that usually get tossed around in times of loss. "He's in a better place." "God needed another angel." "It's part of God's plan." We need to take more cues from the Psalms in times of grief, where the psalmist can be brutally honest and sometimes just lets God have it: "Why have you forsaken me?!" It's okay. God can take it.

Being honest about what we're feeling in grief is much, much healthier than hiding behind vapid theological pablum.

Lamenting the past…and the future? Two young Lutheran pastors, Emmy Kegler and Eric Worringer, recently had a pretty strong reaction to a recent article published in a denominational magazine, and for good reason:


The article, while mostly about the numbers, has a tone to it that we are troubled by. Early on, Bishop Barrow notes that he will soon be retiring the “All-Star team” from his synod.  We are happy to note that this is likely true, because we have met many of these pastors who are in this age group, pastors and others who are great leaders. On the other hand, and while we are nearly positive that Bishop Barrow didn’t intend it this way, the comment conveys that the grief over the loss of older pastors that is not nearly equaled by any sort of enthusiasm for what younger pastors are bringing to the table. We know many friends and colleagues that are already in ministry, and they are All-Stars too, doing the hard work of transforming dying Churches, planting new ones, and nurturing faithful and healthy ones.

These are fantastic leaders: pastors, deaconesses, diaconal ministers, AIM’s, and youth workers, who are Gen-Xers and younger, that grew up in a world and a church that was more secular, more skeptical, less institutional and yet still have committed to the long and hard work of being leaders in the Church in a new era. Not only that, we are glad to say that the American Lutheran church of Christendom is dying, a church marked by “Scandinavian” jokes, cultural enclaves, Lake Wobegon stoicism, and endless conflict over any number of issues.

This same ethos can be seen in places around the United Church of Christ as well. Older pastors are hanging on and at times are protected by denominational leadership, while many younger clergy are having trouble finding pastoral positions. We seem to be set up for a similar wave of retirements, however, and hopefully that will help let some light crack in for new possibilities.

In my own Association, I rejoice that I have many colleagues in their 20s and 30s who have come in to serve churches the past few years. I don't know whether this area is exceptional in that way, but it does give me hope.

Not as liberal, but still pretty liberal. Tony Jones cites a study analyzing those who claim the term "emergent" and whether they lean conservative or liberal:


According to broader surveys, “Nonemergent clergy from these denominations are typically conservative.” Emergent clergy claim to be more diverse and more inclusive than the broader population of church leadership, so Burge and Djupe evaluated this claim using distribution analysis, kurtosis, and nonskew distribution.

Here’s what they found:

So, ECM clergy are more likely to be liberal than nonemergent clergy. However, “while emergents have a mean score that is more to the left compared to nonemergent clergy, their distribution is not skewed around its mean and is relatively flat, supporting a conclusion that emergents are diverse and inclusive.”

Jones concludes that emergent is not as liberal as everyone says it is, and this study proves it. Instead, it exhibits a more inclusive ethos, a "big tent" if you will. Whether that's a good or bad thing depends on who you ask.

I myself have seen some of the arguments play out as to whether some should be fully welcome under the emergent banner. For instance, LGBT people argue that including those who believe such orientations are sinful make for an unsafe atmosphere, and "that's part of the price of being inclusive" is a statement from a privileged position. Jones himself has also come under fire in recent months for his critiques of theological expressions other than white Euro-American viewpoints. So, how safe, or how big is the tent really? Or how big should it be?

I've pretty well given up on emergent. I still appreciate many of the movement's figureheads, but I'm just kind of over the label. I'm at a point where I don't know what such an identification is supposed to do for me any more.

Holy crap, yes. Jan Edmiston gives voice to what both pastors and churches are feeling in these changing times, and as always she's pitch-perfect:


Anxiety is high for many of our pastors and many of our churches. We have pastors who are doing their best but what they learned in seminary isn’t working any more. We have congregations who wonder what happened to the full pews of years past.

The truth is that the rules have changed. And – in addition to anxiety – some of us are angry.

One of my favorite Walter Brueggemann quotes is thus: "the world for which you have been so carefully prepared is being taken away from you, by the grace of God." The truth of that hit me within my first year of pastoral ministry. There's a lot of excitement and possibility in that, but it also brings a lot of anxiety, frustration, uncertainty, and anger. 21st Century ministry is not for the faint of heart.

An attitude, not an image. Nakedpastor David Hayward gives his cartoon commentary on "cool churches:" 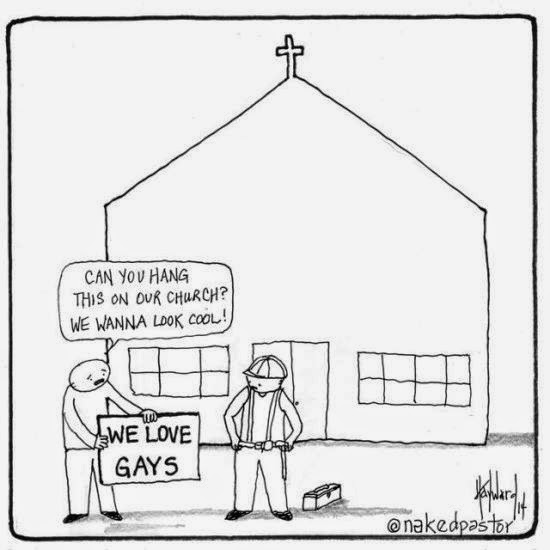 Dress up in skinny jeans and vintage shirts all you want. Are you a fundie in hipster clothing, or are you really striving toward justice and welcome?

Misc. Maybe sermons should be more like TED talks. If you can manage that every week as opposed to the one single time TED speakers do their thing, sure. Jan on clergy appreciation for church childcare workers. Amen. Gordon Atkinson with part one of what's shaping up to be a really good story. Reese Roper with some advice for fathers-to-be.
By Jeff Nelson
Email ThisBlogThis!Share to TwitterShare to FacebookShare to Pinterest
Labels: Church, Ministry, Small Sips, United Church of Christ
Newer Post Older Post Home