Book Review: They Call Me Dad by Philip Cameron 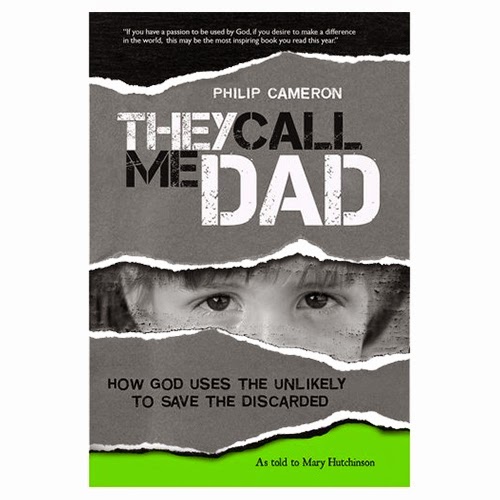 The fall of Communism had come only months before. The iron curtain was finally destroyed, and detailed news from the Soviet Bloc was finally being reported to the outside world. Before the fall, no one in the Western world knew that mass orphanages, filled with babies living in horrible conditions, littered these countries. Suddenly these children were featured on one television news report after the other. My dad had had a steady diet of these reports for days, and he was like a man possessed; nothing else seemed to matter to him.

"Philip, are you there?" he started again. "Did you hear me? Babies are dying, and you have to do something!" - Philip Cameron, They Call Me Dad

The letter from James in the New Testament has this take on what religion is really about: "Religion that is pure and undefiled before God is this: to care for orphans and widows in their distress." (James 1:27) Statements like this tend to rankle some Christians, because it seems to put something other than belief in the driver's seat of the essence of the Christian life. Throughout his letter, James deigns to suggest that service, rather than creedal adherence, is the more important thing, the "pure and undefiled" thing.

One of the implications of passages like this is that when Christians serve alongside one another, belief doesn't really matter all that much. I who identify as more on the liberal end of the spectrum could be serving up soup next to James Dobson's biggest fan, and it doesn't matter in that moment because we're feeding some of God's beloved children. The people we're helping aren't checking our theological ID. They just need someone to notice them and to serve.

In They Call Me Dad: How God Uses the Unlikely to Save the Discarded, we read the story of Philip Cameron: a successful pastor, preacher, evangelist, and singer whose life takes a dramatic turn when his father insists that he help children across Romania and elsewhere in the former Soviet Union. These children are living in what could be called worse than squalor: mold-infested buildings with no heat, little to no food served each day, workers who withhold affection, and no prospects for the future other than homelessness and, for many of the girls, human trafficking.

Cameron's description of these conditions is vivid and, I think, one of the most convicting features of the book. Even since the fall of the iron curtain, what children are facing in these places is perhaps not well known. My wife, who is a psychiatric nurse practitioner, has had firsthand experience with a few who have been adopted out of Romania and has seen the lasting effects that such trauma has on them. If I were to recommend this book to anyone, it would be primarily for this reason.

This is certainly a very personal narrative for Cameron, as he describes first his conflicts with and later his grief over his father, as well as his struggle to help the orphans and, in particular, to adopt one of them. The emotion he feels in each chapter as he reacts to these events is apparent, as are his accounts of the process by which he organizes projects and raises money to improve the quality of life in these orphanages. This includes haggling with government workers, dealing with Christian celebrities who co-opt his cause for their own purposes, and building relationships within neighborhoods.

There are times when Cameron's theology of God's guidance may be seen as problematic. There is one story, for instance, when Cameron is looking for guidance and prays for God to send a fox across the road as a sign of what he's supposed to do, and sure enough, one appears. At other times, he talks about praying for people to come around to his point of view so that he can carry on with his sense of mission. I certainly wouldn't dispute that Cameron's story or cause is saturated in the type of love and justice that God wishes for him and others to pursue, nor that God isn't with him every step of this journey. But how he frames this for the reader seems to trip up the narrative more than help it along.

For some, this will seem like a minor quibble. And if one is able to see past the theology--or even if one is served by it--to focus on the main narrative, then perhaps that is more critical to begin with.

Ultimately, Cameron's story is one of taking on the seemingly impossible to see what he can do to help others. Fortunately for him, he is also aided greatly by his status and his connections, which also assists him in fulfilling some of his prayers. This was, after all, not a simple man from Alabama being called to do amazing things in eastern Europe, but a well-known evangelical pastor being aided in his work by well-resourced allies.

Cameron is wise enough to acknowledge this, however. In more than one instance, he reflects on the toll his newfound calling takes on his schedule and on relationships within the evangelical world. Where once he was traveling across the country to speak or sing in big beautiful churches and TV studios to the adoration of so many, he is now driving on dirt roads to deliver food and supplies to some of the most dire and desolate places in the world. At times he worries whether he'll be asked back, not just because he had to break commitments, but because he's now serving in a role much less palatable to those audiences.

Some will have a hard time with the theology, but the story is much bigger than that. God indeed calls all people no matter how we image the one doing the calling. Widows and orphans don't check theological ID. They just need someone to notice them and to serve.