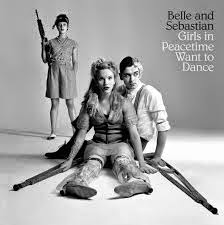 1. I admit that I only have a passing acquaintance with Belle and Sebastian. I mostly know them as the "sad bastard music" that Dick plays in the movie High Fidelity. This month they released Girls in Peacetime Want to Dance, which is certainly something other than how it's described in that film. This is almost a dance-pop record, with liberal use of synthesizers and upbeat tempos seemingly borrowed from the 1980s. I'm normally not big on this sort of sound, but Coffeedaughter and I had a good time dancing to this. I'd especially recommend the peppy "Enter Sylvia Plath" and the whimsical "Perfect Couples."

2. One of my most-anticipated albums of the year came pretty early, as The Decemberists released What A Terrible World, What a Beautiful World last week. They slowly released a few songs in anticipation, including "Lake Song" and "Make You Better," which are quite good. But really, as expected, the entire album is wonderful. "Anti-Summersong" is upbeat and playful, "Carolina Low" is pensive soulful bluegrass...the whole thing is just incredible. The lyrics are vintage Decemberists in their cleverness, and the instrumentation fits each perfectly. I've already deemed this one of my favorites of 2015. Here's the video for their first single, "Make You Better," starring Nick Offerman:

3. I recently read Sobriety: A Graphic Novel by Daniel D. Maurer. You can read the review here.

4. I also recently read They Call Me Dad by Philip Cameron. That review is here.

5. I recently ran across this cover of Taylor Swift's "Blank Space" by Michigan hardcore band I Prevail. I like it much better than the original: