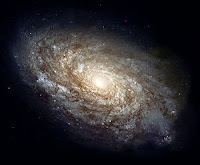 Sometimes I go back and find a post that I don't think about very often, and gain an entirely new appreciation for it. This post from August 2012 is one of those.

In the beginning when God created the heavens and the earth, everything was formless; a swirling, chaotic void. But God interacted with the void, shaping and ordering it. God commanded the light and the darkness, the waters and the sky and the land, the birds and the fish and the animals, and eventually humanity. God took that swirling primordial soup and fashioned something from it. And God called all of it good.

Was God finished? Did God never create anything after calling it all "good?" No. God kept creating, shaping, and ordering. Stars and planets and entire galaxies formed, and some eventually burned out or began again after ice ages or collisions. God created a dynamic universe, full of novelty and change, our own galaxy expanding and contracting, our own earth experiencing shifting plates and the circle of life that is basic to all of existence: life, death, rebirth. Change.

Humanity, it turned out, is a dynamic species. We learn, we've developed, we've advanced in technology and knowledge. Some may argue that we haven't advanced in wisdom, others--maybe the same ones--will argue that we've certainly advanced in sin. As we've discovered how we may ever better make use of this world's resources, we've also discovered how much more efficiently we may oppress each other. And as we've come to value our advancements for good or for ill, we each in our own way have elevated some of them to god status: money, power, violence, technology, and on it goes.

In one case when this was so, God was on a mountain with Moses. Moses, it turns out, had been on this mountain for quite some time. He'd been on that mountain with God for so long, in fact, that the Israelites began to worry, or forget, or become bored. They decided that they wanted a new god, one that they could see and that would bring them joy. So with the help of the priest Aaron, they fashioned a calf out of gold, saw that it was good, and began to worship and revel.

God saw the calf and decided then and there to wipe out these people, this fledgling nation, for their disobedience. God decided to start over with a different people; God would find a new nation through whom the world would be blessed.

When Moses heard it, he stood up to God. He said, "You made promises. You made a covenant. They're not keeping their end at the moment, but you must not forget your end. You brought these people out of Egypt, and it can't be for nothing."

God looked again at these people dancing, singing, drinking. God looked at this aspect of God's dynamic creation and still saw that it was good even though they'd taken their own path. This was always a possibility: this turning away, this disobedience, this waywardness, this elevation of the wrong thing.

In the Hebrew: "repented."

God changed what God was going to do.

The people didn't get off scott-free that day. They still had to answer for what they'd done. But it was due to God changing in order for that to happen. Rather than being wiped out, God changing made it possible for them to change and for their formation to continue.

Some want to believe that God only seemed to change God's mind that day. Or that maybe God was just testing Moses' leadership or had set up the people to teach them a lesson. But none of that is in the story. The only detail that is actually in the story is that God changed. Those that have certain theological interests to protect try to argue otherwise, read back into what's written, quote confessions at length as if sheer density of words will make up for what they want to be there but isn't.

But all that is there is that God changed.

The concern is that if God changes, then there is nothing constant about God. If God is not outside of our world, not the great Immovable Mover, then it's not really God. And in a world that is always shifting, always changing, seemingly every bit as chaotic as it was before creation began, we cry out for something constant, sure, and steadfast.

Is there anything constant about God? How can it be otherwise?

There are things constant about God. Two chapters after the golden calf incident, it is proclaimed that God is a God of steadfast love. Constant, unchanging, steadfast love.

God's love for creation is constant. God's concern for redeeming what seems lost and restoring what seems broken is constant. Every situation calls for this love and concern, but not every situation calls for it in the same manifestation. At times the Israelites needed love in the form of manna to eat, at other times they needed love in the form of being forced to face their idolatry. Love does not look the same in both of these instances. God needed to change in order for love to be made known.

I know people struggling with mental illness, others with addiction, still others with regret. God relates to each in a particular way to bring healing, restoration, salvation. But there is no one static path through these problems. Imagine reading the Four Spiritual Laws to someone in rehab struggling through alcohol withdrawal. Imagine trying to guide a schizophrenic through AA's 12 Steps. Imagine constantly hammering away at the one feeling regret constantly reminding them of what they're trying to resolve, or tiptoeing around the one who refuses to do so out of concern for their comfort. Would any of these be appropriate or truly loving?

Even proposed treatments and programs need to be adapted to the individual's story in order for the journey back toward wholeness to be taken. Some may argue that it takes the same kind of faith, the same kind of belief, to save. But whatever our suffering, whatever our struggles, whatever our golden calves, God relates to each of us in perfect, unchanging love in order to give us what we need most.

God changes some things in order not to change others. God may relate to people in different ways, but showing the same, steadfast love in all.