Yes. Gordon Atkinson reflects on the importance of an open heart:


A friend recently told me that he had good evidence to suggest that perhaps 25% of Muslims worldwide support acts of terror as a means to achieve what they perceive to be righteous goals. I don’t know where he got his numbers. I don’t have the energy or knowledge to dispute them. But what do these numbers mean to me?

Tomorrow I will pick up my daughter and her friend Zohal and drive them home from school. Zohal and Lilly have been friends since elementary school. She and her parents are kind and good people. And she is brave to wear her Hijab in this climate of anger and fear.

It's easy to stereotype an entire group, but what about the actual flesh and blood people who are harder to treat as inhuman? Of course, if one simply avoids ever meeting someone outside one's own demographic, I suppose it's not that hard. That's unfortunate not just for the people you're judging/condemning, but for your own soul too.

Speaking of which. John Pavlovitz reflects on a tactic commonly used against him when debating Christians about LGBT issues:


Apparently to some Christians, the only logical explanation for a person of faith speaking on behalf of the “homosexual” community, is that they themselves must also be so: a sort of, covert queer self-preservation.

It never occurs to those people that we don’t need totally commonality to align ourselves with other human beings; in order to champion their humanity and uphold their dignity.

I feel incredibly sorry for followers of Jesus like Ralph, who are so filled with hate and bigotry, that they would even feel the need to ask such a question of another human being. It shows that their hearts have become so hardened, their need to discriminate so great, that they cannot fathom any other option, than some alternative narrative to justify that person supporting LGBT people; as if total affinity is ever a prerequisite for loving someone unconditionally.

Here's the thing about how empathy works. You see someone who may or may not be part of your same demographic group who is being demonized, discriminated against, getting a raw deal or suffering from unprovoked violence simply because of their identity, you imagine what it must be like for that person, and you take action to help stop it. It doesn't make you one of them (THE HORROR), it just makes you loving. Jesus said some stuff about being loving.

Remember those times when people called Jesus out for who he hung out with, as if he was guilty by association? Same thing.

Brilliant. Jeremy Smith reflects on how libraries have adapted to the internet era, and then wonders how the church can do the same:


Faith happens anyway. Discipleship is inviting people into a process where they learn or experience things that they won’t learn on their own. If churches are serious about reaching the Creatives and Innovators in our midst, it takes offering them something different than they would get on their own as holy solitaries.

Libraries like Oxford have figured out some unique ways to be in the world that benefit creative engagement–will the Church follow suit and create a culture of organic difference in contrast to the mechanistic world around them? Or will the pews gather the same dust as the narrow stacks down below where only the dedicated wander?

He lists five ways libraries have adapted, and finds five parallels with the church. The whole thing is great.

You mean...it's worthwhile? Jamie reflects on her prayer life:


I've seriously struggled with this question for like ever. Why pray? If I don't see God as a cosmic wish granter whose magical genie powers can be conjured by the fervent prayers of men, then why should I bother to pray at all?

But, as much as I've managed to cheapen it over the years, I've never been able to fully shed prayer as a core value. For a while, it's just been sort of lingering in the background of my Faith, hoping to be picked up, longing to be embraced once again. More recently, though, I've dusted off the practice of prayer by actively, intentionally entering into conversations with God – and not as a sleep aid. I still can't say I understand it, I still have no idea how it works, but I think I can honestly say I've returned to prayer.

Over the past few months, I've had good reasons to pray - not for myself, but for others – through grief and heartache, through loss and through gain, and through celebration, through ups and downs and a bunch of WTF's, through gratitude and grace, through life and through death... I prayed for them. No, actually? I prayed with them...

And that's when I remembered why we pray.

The post includes her old approach to prayer, which is probably pretty common: paying lip service to praying for others without actually doing so; an easy way to express support with no follow-through.

Some suggest that we just stop praying; that it doesn't do anything and that it keeps us from actually acting on the needs of others. But Jamie suggests that it helps connect us to one another, when we take it seriously. Even moreso, a regular prayer practice helps transform our outlook on the world and the way we interact with it. Or at least, that's what it can do if we get rid of the old notion that prayer is just asking God for stuff without any expectation that we ourselves need to take time to listen or change in any way.

Trapped, indeed. A double dose of Gordon Atkinson, as he reflects on an issue facing many pastors that isn't discussed very often:

Yes, I said thousands. I thought about it. Hundreds is too low a number. It’s thousands. Thousands of ministers working in churches and wishing they could leave.

It’s very common. I know this because I used to be a minister. And I reached the place where I wanted to leave. And I wasn’t alone.

From there, he reflects on why many don't think they can leave, particularly a belief that their skills don't translate well to a non-ministry setting. I don't completely buy that. If it came to it, I'd share that I have extensive experience in public speaking, facilitating meetings, giving presentations, leading workshops, planning publicity, leading teams in developing visions and action plans, and interpersonal skills, among others.

But the larger point is that many pastors feel trapped and don't know how to leave ministry. I do get it. I'm sure it's frightening, and comes with a great deal of stigma for many from others. So one question is how can these people find greater support?

Only 15? Dave Jacobs shares 15 myths that pastors understand. The keyword is "myth:"

3. If you work really hard you can grow your church.

5. People with a background in business are the best people to have on your church board.

The whole list is good. I bet we could come up with 50 more.

Speaking of which, part 2. Jan Edmiston reflects on some of the ideas she shares with congregations as a judicatory staff person, and what usually happens:


You want to know how to reorganize your governing board? I have several ideas. Want to grow your congregational spiritually? I have suggestions. What to shift your congregation’s culture? I can prompt you. Want to learn how to connect with the neighborhood? Not a problem.

But the professional minister who decides to adopt one of my Big Ideas is the one who pitches the shift to an often skeptical audience, sweats the details, takes the heat, risks her job, places a target on his back. Failure is almost guaranteed.

One of life’s realities is the belief that positive change will come without the excruciating work it takes to make those changes happen.

Ideas are easy. I have a ton of them myself. Sometimes I actually try to implement them, and when that happens I think I have a 50% success rate, but that's probably being generous. The difference between the awesome earth-shaking, life-changing idea in my head and actually trying said idea is that people need to be convinced, logistics need to be laid out, sometimes anxiety needs to be tempered, and even after all that nobody might be interested.

Silence and power. David Hayward shares a cartoon on how to silence a dog or person, particularly when the latter raises questions about church abuse: 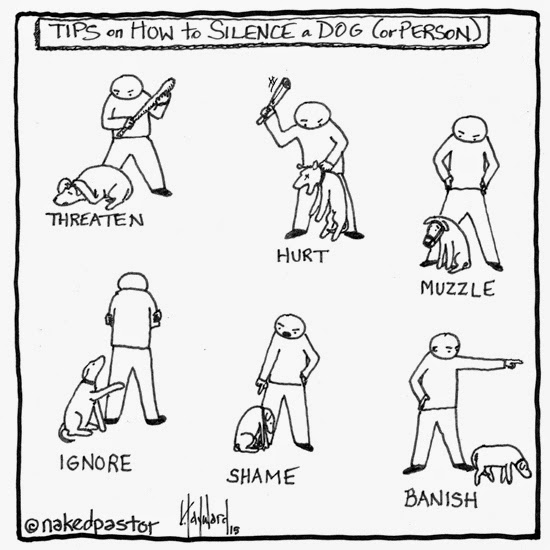 I've read, heard about, or experienced all of these. David has a way of holding up a mirror to church culture through his art.

Misc. PeaceBang on unconstructed jackets. I now desire several. Admit it: your favorite celebrity is problematic. Momastery on that time she cancelled her birthday. Did I mention that I finally added Momastery to the blogroll?
By Jeff Nelson
Email ThisBlogThis!Share to TwitterShare to FacebookShare to Pinterest
Labels: Church, Justice Issues, Ministry, Small Sips, Spirituality
Newer Post Older Post Home