Vintage CC: "You always have the poor with you" 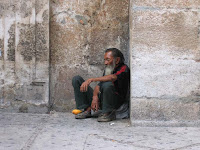 This post from March 2010 came to mind the other day after I read a commentary pointing out that a pizza place had nearly a million dollars raised for them by those who support their denying service to LGBT people while homeless shelters and soup kitchens struggle for funding. The Bible passage discussed here is a common answer for Christians wishing to justify this view. So here I go analyzing what Jesus really meant.

At our Communal Word discussion group last night, we talked a lot about John 12:1-8, which is this Sunday's Gospel text according to the Revised Common Lectionary. For several reasons, I anticipated that the group would spend some time with this passage over the other two, and I was not disappointed.

First off, here's the passage in full:


Six days before the Passover Jesus came to Bethany, the home of Lazarus, whom he had raised from the dead. There they gave a dinner for him. Martha served, and Lazarus was one of those at the table with him. Mary took a pound of costly perfume made of pure nard, anointed Jesus’ feet, and wiped them with her hair. The house was filled with the fragrance of the perfume. But Judas Iscariot, one of his disciples (the one who was about to betray him), said, “Why was this perfume not sold for three hundred denarii and the money given to the poor?” (He said this not because he cared about the poor, but because he was a thief; he kept the common purse and used to steal what was put into it.) Jesus said, “Leave her alone. She bought it so that she might keep it for the day of my burial. You always have the poor with you, but you do not always have me.”

Some version of this story appears in all four Gospels. In Matthew and Mark, they're pretty similar: Jesus dines at Simon the leper's house, and an unnamed woman comes in with the ointment and anoints his head. Somebody (not Judas) makes the point about the expense and the poor, and Jesus gives an explanation similar to what's in John.

Luke is vastly different. Jesus dines at a Pharisee's house instead, although the Pharisee's name is still Simon. A woman identified only as "a sinner" comes in and anoints Jesus' feet with ointment, but the complaint is that Jesus is letting an unclean sinner touch him, leading to a conversation about forgiveness, gratitude, and hospitality.

In John, this passage comes right after the story of Jesus raising Lazarus. Jesus hasn't wandered far; he is now sharing a meal at Lazarus' house, with Mary and Martha attending. This is the only instance where the woman who anoints Jesus is given a name: it's Mary the sister of Lazarus. Given the story's placement, Mary may be doing this out of gratitude for Jesus raising her brother, but of course Jesus gives a different explanation.

As a sidenote, I think that many condense elements of Luke and John's description of the woman, suggest that the Mary here is Mary Magdalene, and the result is the theory that Mary Magdalene was a prostitute, the suggestion of which doesn't actually appear anywhere in the New Testament.

Anyway, during the course of this episode in Matthew, Mark, and John, somebody raises a stink (pardon the pun) about the ointment being used in this way, and Jesus responds, "You always have the poor with you, but you do not always have me.”

It's kind of an unsettling statement, especially if you consider all of Jesus' admonitions and allusions to helping the poor or being among the poor. It was certainly unsettling for my discussion group. They wondered why Jesus would say such a thing given all the things that he says and does that suggest that the poor are very important to Jesus and to God's kingdom. Is Jesus really dismissing the poor here?

I've been hearing and reading this verse tossed out a lot since Glenn Beck made his comments about social justice churches. Christians who support Beck's statements or who otherwise want to downplay the importance of helping the poor have used this statement by Jesus as justification for such a view. The argument as I understand it is that faith in Jesus is the more important thing; nurturing that faith and an awareness of that presence is what Christians should be about. There will always be poor people, helping them is an endless task & thus shouldn't be taken too seriously, belief in Christ is the more important thing, and Jesus says as much here.

That's not what Jesus is really getting at here, though.

First off, Jesus was surely familiar with the instruction of the Torah. He was a faithful Jew, after all. Among other things, he would have been familiar with Deuteronomy 15:11:


Since there will never cease to be some in need on the earth, I therefore command you, "Open your hand to the poor and needy neighbor in your land."

As a faithful Jew, Jesus would have known this verse. Not only that, but he basically quotes it in the story in question. The command in this verse is not to give in and give up due to how vast the task of helping the poor is. Instead, the command is to keep helping; to always be openhanded toward them.

Second, one needs to consider the context in which Jesus' statement appears. Mary has anointed Jesus' feet with a very expensive ointment, somebody complains about selling it and giving it to the poor, and Jesus gives his statement. In Matthew, Mark, and John, this episode occurs shortly before the passion story begins. In these three versions, Jesus talks about being prepared for his burial, and thus admonishes people to leave the woman alone.

In other words, Jesus' statement is made in anticipation of the events that follow: his journey to Jerusalem, and his final days leading to his death. He's basically saying, "My earthly time with you is running out. I'm only with you for a little while longer, and this anointing is a foreshadowing of things to come. So pay attention to this for now." The poor are no less important, and are not a side project in the grand scheme of things. It's just that at the time of this incident in the three Gospels where Jesus makes this statement, some big and tragic things are about to happen and Jesus' disciples need to be ready for it.

In conclusion, it's a mistake to lift Jesus' statement out of its context to justify ignoring or downplaying the need to help the poor. That's not what Jesus means, and Christians would do well to let that common misinterpretation go.
By Jeff Nelson
Email ThisBlogThis!Share to TwitterShare to FacebookShare to Pinterest
Labels: Vintage CC
Newer Post Older Post Home