Small Sips Considers the Next Career

Every new beginning comes from some other beginning's end. In a recent interview with Religion News Service, author and speaker Phyllis Tickle talks for the first time about being diagnosed with stage 4 lung cancer:


As she reflects on her life, Tickle says she has always seen herself as a listener, something she admits may surprise those who know her literary output and her gift of gab.

It’s an inner voice, she says, that has always told her what to do, what was coming next in a life filled with so much variety. And it’s a voice she has always obeyed.

“It’s the truth. Just like I’m told to do this,” she says, referring to her terminal illness. “Which is why it doesn’t bother me. The dying is my next career.

“You can call it whatever you want to. Spooky? I hate the word ‘mystical.’ It has such a cachet now. Like an exquisite and high-priced perfume. But if that makes me a mystic, so be it.”

I have fond memories of hearing Tickle speak at Eden Seminary a few years ago. She was knowledgable, articulate, and hilarious. She has been an important voice for the church and for spiritual practice. I lift up prayers of peace for her in her final earthly months.

True. Very true. Mandy Smith presents what a typical Sunday looks like from a pastor's perspective:


Michelle rounds the corner, jokes with John, and bustles inside. Greeting her with a hug, I ask if things are any different since last time we met. Her face says no but she tries to sound hopeful. I'm at a loss to know how to comfort her in light of the troubles she's facing. A sound tech volunteer pops his head out of the sanctuary and asks if I know where we keep the extra batteries. So I promise to have coffee with her this week and excuse myself to dig around for batteries. Oh, and candles too.

There's still time to run to the bathroom before the service begins so I make my way there via the sanctuary. Everything seems in order. I check in with the staff and we have a quick run through the order of service and pray for the day. As we pray I remember that I never did go over the sermon that one last time and add a prayer that God will work through whatever I have to bring. I feel Rebecca's reassuring presence beside me during the prayer. She holds my hand a little longer after the prayer is done and asks me how I am. She's the closest thing to a friend I have here and I'd dearly love to tell her how I am. What would I say? It takes me a while to find the answer and when I do, I realize there isn't time to go into it now, with the service about to begin. So I tear myself away from this conversation to start ramping things up. It's not a performance so I shouldn't be anxious. But something significant is about to happen, and I have a part in making it happen.

A pastor's task list on Sunday morning may begin with preaching, leading worship, and maybe teaching a Sunday School class. But it also ends up involving checking in with people whom you know are going through something, searching for batteries, passing along a bit of info to the organist or sound tech, and a million other little things. My mind is going a mile a minute every Sunday, and these are a few of the reasons why. Go read the whole thing.

Not so fast, my friend! Jonathan Merritt writes about the recent Pew study showing that American Christianity continues to decline. Mainline denominations are feeling this a lot more than evangelicals, but he writes that the latter group needs to slow their roll when it comes to interpreting that as a triumph:


According to Mike Hout, a sociologist at New York University, evangelicals who want to blame the decline of mainline Protestantism on liberalism are simply not paying attention. He says that population data has always indicated that the mainline decline was mostly attributable to birthrates, a notion he published in an article in the American Journal of Sociology.

"Seventy percent of mainline decline as it was known in those days was due to the fact that evangelical women were having one more child on average than women in the mainline tradition," Hout says. "This trend prevailed until right around the turn of the (21st) century."

Hout adds that he believes evangelicals' greatest weakness is what they've championed as their greatest strength: the marrying of political and theological ideology. The rise of the religiously unaffiliated -- the "nones," as in "none of the above" -- dates back to 1990, when the Christian right was in full-on combat mode. As conservative bodies became more partisan, members who couldn't stomach the political agenda waved goodbye.

For a while yet, there will likely continue to be many who interpret these sorts of things in terms of "liberal=decline, conservative=growth," but as demographics continue to change and people continue to realize that the many other options on Sunday mornings are preferable to church affiliation, they'll need to find a different narrative. I'll go ahead and take a wild guess that it'll have sound something like, "Well, they were lukewarm believers who couldn't handle our truth, anyway." Anything to avoid taking a long, hard look in the mirror.

It was Third Day. In the library. With the lead pipe. Tyler Huckabee wonders who killed the contemporary Christian music industry:


"In CCM, if you want to sing about certain, more uncomfortable things, you won't have an opportunity," [John Mark McMillan] says. "But on the same end, if I want to sing about Jesus on Top 40, that's not going to happen either. The gatekeepers in that world are just as weird. The problem is, if I'm a believer and I want to sing my honest thoughts about Jesus, it's like, 'Where do I do that?'"

That's a question many of today's Christian artists may well be asking — musicians with compelling messages and world-class talent, but no labels willing to take a chance on them.

The industry has eased into making church music for churches, unable to recapture the ideas that made it such a prominent force in decades past.

Translation: it killed itself when it went for the sure thing over taking risks, and the market for the sure thing is shrinking. Even by the time I graduated college in '01, there were less artists wanting to transcend and sing about their doubts and scars while striving for artistic originality, and more stringing together the same cliches over the same guitar chords.

Now we have less "Christian artists" and more artists who happen to be Christians, which is actually the better way to do it. I'm glad for people like Five Iron Frenzy, Jennifer Knapp, Derek Webb, and others who sing honestly about their faith (if they feel like singing about it) while not sacrificing musical quality for the sake of the message.

"I'd like to teach the world to sing in perfect harmony..." James Martin, S.J. reflects on the Mad Men finale, and Don Draper's spiritual awakening:


To my mind, Don has found the Real Thing. He’s learned something about who he is. Someone who can indeed love and is loved. This was his great challenge in the series, and Odysseus-like, he kept searching for an insight into love. In one episode he confesses to his second wife, Megan, that he has only recently learned to love his young son. To cadge a line from the Coke ad, Don would like to teach himself to love. But he is also someone who is, for better or worse, an ad man. Those two things are not inconsistent. He’s not an evil person for going back to McCann Erickson. (As an aside, the scene where Hobart, the McCann exec, tries to strip Joan of her dignity, was perhaps the most accurate depictions of the corporate world that I've seen on television. Roughly ten years later, in 1982, I'd encounter some of that world at GE.) But he’s also not going to become Siddhartha either. (Though I bet he reads it in a few months.)

I've read a few takes on the finale, and even the series creator acknowledges that the very end indicates that Don went back to McCann and created the iconic Coke ad. But he's allowed, as most people who are intentional about developing their spirituality live in that reality between their connection to the transcendent and those other things to which they're dedicated, e.g., family, career, etc. That's how it's supposed to work, really. Some may cynically see Don as having used his time at the retreat center to come up with an idea for a commercial and not much more, but he could also return to his job with a newfound take on who he is and how he'll approach his work.

This is why I keep reading. Gordon Atkinson has a way of writing about faith and the world that I desperately want to emulate at times, because he just names certain things so well. That's no less the case with his experience of a particular prayer during worship:


Once I was a small boy with my feet dangling from the pews while his father stood in the pulpit and proclaimed the Word of the Lord. Now I am a middle-aged man who turns his face away from the pulpit and looks to the back of the church for an exit. But then those words hit me. Receive our prayer. And I think maybe I should stay.

I think that phrase gives me a sense of the fragile reality of the Church. The Church may seem very solid to you. Very ancient and unyielding, a vast movement of human belief and thought that stretches behind us for thousands of years. But these words reveal a more fragile side of her. Here are people who ask only that their prayers be received. Not answered. Just received. The humblest of requests. Our desires offered to the intelligence behind the universe to be heard. Noted. Held in the mind of the Almighty, the Ancient of Days, the Old One.

I could die with nothing more than that. No heaven. No hell. No miracles or healings. No promises. Nothing owed to me. Just the tender hope that I was known.

You see? I mean...that's everything, isn't it? In those moments when I too am looking for an exit, there's this right here. There's that same hope that whatever is beyond the words I say and the stained glass I admire is with me anyway, whether I feel it or not. 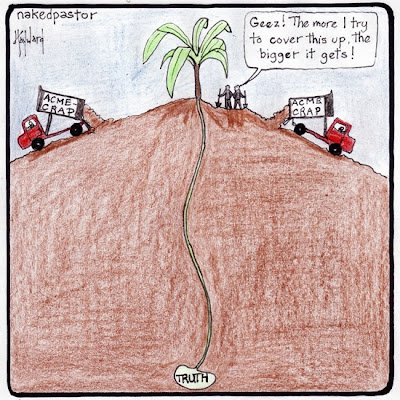 Misc. Brant Hansen's If Jesus Had a Blog posts are always good. Scott Wells on four choices for downsizing the church in light of changing numbers. How to meditate over a cup of coffee. You mean everyone doesn't already do that? Jan Edmiston asks where the creative church leaders are.
By Jeff Nelson
Email ThisBlogThis!Share to TwitterShare to FacebookShare to Pinterest
Labels: Church, Ministry, Small Sips, Spirituality
Newer Post Older Post Home